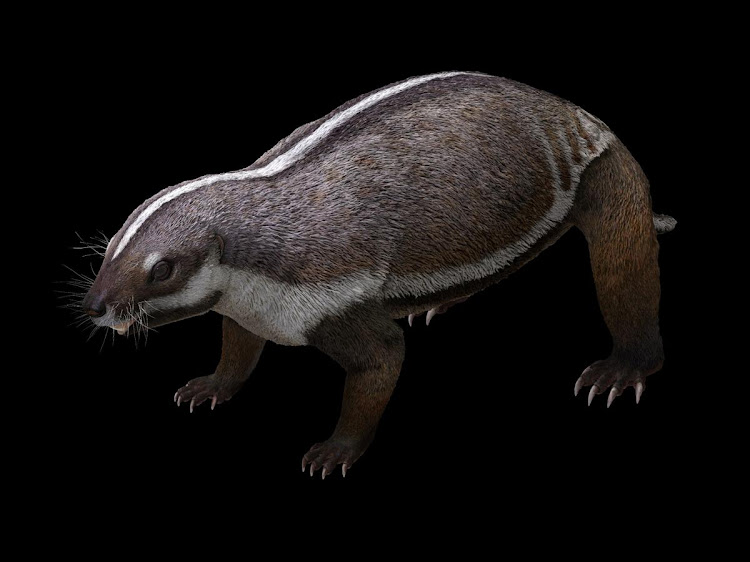 A prehistoric opossum-sized critter dubbed the “crazy beast” that inhabited Madagascar at the end of the age of dinosaurs is providing scientists insight into early mammalian evolution.
Image: SUPPLIED

A prehistoric opossum-sized critter dubbed the “crazy beast” that inhabited Madagascar at the end of the age of dinosaurs is providing scientists insight into early mammalian evolution even as they scratch their heads over its bewildering anatomy.

Researchers on Wednesday described an exquisitely preserved fossil of the plant-eating mammal named Adalatherium hui, which lived 66 million years ago during the Cretaceous Period and superficially resembled a badger with its long torso and stubby tail.

Scientists had known precious little about southern hemisphere mammals during the Mesozoic Era, the age of dinosaurs, with the fossil record from the northern hemisphere much more extensive.

Adalatherium offers by far the most complete skeleton of a Mesozoic mammal from Gondwana, which was Earth's southern supercontinent encompassing Africa, South America, India, Australia and Antarctica. It also is the fullest fossil representing an enigmatic mammal group called gondwanatherians that thrived for tens of millions of years but died out about 45 million years ago leaving no living relatives.

Its many uniquely bizarre features defied explanation in terms of relationships to other mammals. In this sense, it was a 'crazy beast'

“Its many uniquely bizarre features defied explanation in terms of relationships to other mammals. In this sense, it was a 'crazy beast,'" said Denver Museum of Nature and Science paleontologist David Krause, lead author of the study published in the journal Nature.

“We suspect some of this bizarreness might be due to evolution in isolation on an island,” added New York Institute of Technology paleontologist and study co-author Simone Hoffmann.

Life on islands develops differently than on the mainland, isolated with idiosyncratic food sources, competitors and predators. Madagascar at the time boasted other oddballs including a huge 16-inch (40-cm) frog named Beelzebufo that may have eaten baby dinosaurs and a pug-nosed plant-eating crocodile named Simosuchus.

Mammals first appeared during the Triassic Period more than 200 million years ago and remained bit players until an asteroid struck Earth 66 million years ago, eradicating the dinosaurs and paving the way for mammals to dominate.

The fossil represented an individual not fully grown, at about 20 inches (52cm) long and 6.8 pounds (3.1kg). Most Mesozoic mammals were mouse-sized, about 100 times smaller than Adalatherium.

“Adalatherium was a giant in its time,” Krause said.

Adalatherium would have moved differently from today's mammals, with it back legs in a more sprawling posture — extending away from the body like reptiles — while its front legs where placed underneath the body like most other mammals. When Adalatherium walked, its spine would have bent side to side in a reptile-like manner.

Its body was elongated with more back vertebrae than any other Mesozoic mammal. Its strong back and hind limb muscles and its long claws on its back feet indicated Adalatherium was an adept digger that possibly excavated burrows.

Its rodent-like front teeth may have helped it gnaw on roots or other plant material while its molars were unlike any other mammal. Its cranium had more facial holes than any other mammal, serving as passageways for nerves and blood vessels supplying a sensitive whisker-covered snout.

Madagascar was a dangerous place. Adalatherium may have been hunted by meat-eating dinosaurs, large crocodiles and a huge constrictor snake.

“Figuring out how Adalatherium might have moved or eaten with basically no modern analogue is one of the most intriguing parts of this project,” Hoffmann said.