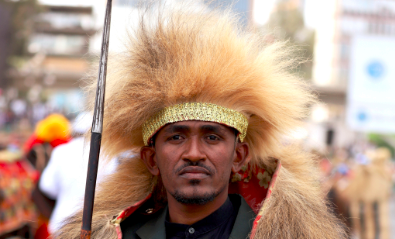 Imprisoned as a teenager for his political activism, singer Haacaaluu Hundeessaa grew into one of Ethiopia's biggest stars and his songs became anthems for the young protesters who brought down one of Africa's most repressive regimes.

Haacaaluu sang in the Oromo language of Ethiopia's largest ethnic group, but his lyrics — about yearning for freedom and exhorting Ethiopians to solve their own problems — touched a chord more broadly.

His first album was released in 2009, after he had served five years in prison, where he wrote most of his songs, according to a profile in O Pride, an Oromo magazine.

His second album two years later was a hit on Amazon, but it was his single “Maalan Jira?” (What fate is mine?), released just before a wave of government-backed evictions began around the capital in 2015, that became a rallying cry. The song has been viewed more than 3 million times on YouTube.

As the government wavered, in 2017 he released “Jirra”, a defiant cry meaning “We Are Here” — that has become a greeting among Oromo youth. That December, he sung at a star-studded concert in the capital to raise money for displaced Oromo families.

Over the course of the Oromo protests between 2015 and 2018, it's impossible to really think of anyone who played such an important role in terms of galvanising young people to come out to the streets and protest

“Over the course of the Oromo protests between 2015 and 2018, it's impossible to really think of anyone who played such an important role in terms of galvanising young people to come out to the streets and protest,” said Awol Allo, senior lecturer of law at Keele University in England.

“Today's ruling party and the prime minister would not have come to power if it were not for the immense contribution that Haacaaluu made to the Oromo protest movement.”

Over the next two years, the protests spread far beyond the Oromiya region, meeting a bloody response from security forces. Around 30,000 people were jailed, including activists, writers and opposition leaders.

Eventually the prime minister resigned in February 2018 — unprecedented in Ethiopian history. Abiy Ahmed, whose father is Oromo, was appointed prime minister instead.

Abiy released the political prisoners, unbanned many political parties and promised free and fair elections. But some Oromo say they are still suffering government persecution — part of the region is under federal military control.

“I did not know how to write lyrics and melodies until I was put behind bars,” he told the British Broadcasting Corporation in 2017. “Music is my life. It got me friends and foes. But it remains a tool that I use to speak for my people.”

Haacaaluu was shot dead in Addis Ababa on Monday by unknown gunmen and buried on Thursday at a church in Ambo, his home town about 100km (60 miles) west of the capital. — Reuters