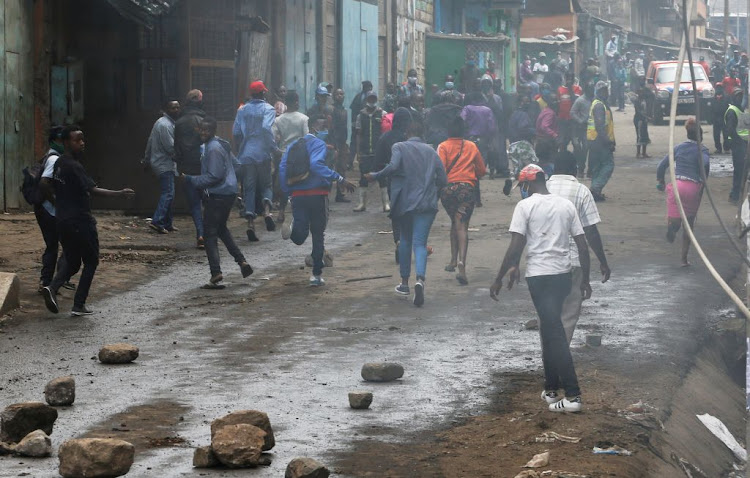 Residents and traders run during clashes between traders and riot police, following demolitions of their homes and stalls amid the spread of Covid-19, near the Korogocho market, within Kariobangi settlement of Nairobi, Kenya, on May 8 2020.
Image: REUTERS/Thomas Mukoya/File photo

Kenya's national police service has arrested two police officers and opened an investigation after "a shooting incident" in the eastern county of Garissa, the police service said on Sunday.

The Independent Policing Oversight Authority (IPOA), a body set up to investigate cases of police brutality, has also sent its investigators to Garissa, it said late on Saturday.

The national police service said two officers had been arrested "over a shooting incident at Soko Ng'ombe market within Garissa Township" and that the inspector general had ordered an investigation.

"The inspector general has equally directed the directorate of criminal investigations to carry out forensic analysis on the firearms used by the officers," it said.

Kenya fishermen say they are squeezed by Ethiopian mega-dam

Fishermen on the shores of Kenya's Lake Turkana, the world's biggest desert lake, have no doubt about what is to blame for their dwindling fish ...
Africa
1 year ago

Garissa member of parliament Aden Duale said in a Twitter post police had shot dead Aden Abdi Madobe and Muhiyadin Adow Shibin on Saturday during an "arrest mission". He did not give further details.

International campaigners have raised concerns about police behaviour in the East African nation, including during lockdown restrictions.

Rights group Amnesty International said Kenyan police had killed at least 100 people in 2020, with 21 related to Covid-19 lockdown infractions, such as curfew or mask violations.