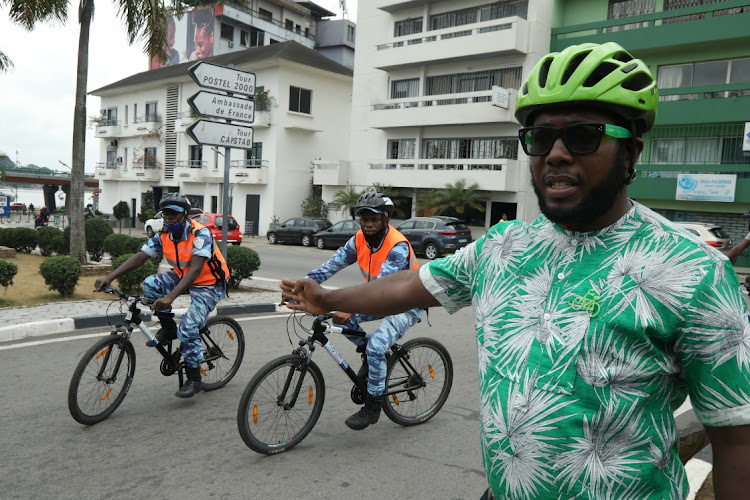 Wearing a bright green helmet, cyclist Andy Costa weaves a dangerous path through trucks barrelling down the streets of Abidjan in the Ivory Coast.

Africa's traffic-clogged cities make it the world's deadliest continent for pedestrians and cyclists, according to the World Health Organisation. Many lack pavements, let alone bike lanes.

That may soon change thanks to a generation of African cycling activists who have been given a boost by the Covid-19 pandemic and the need to avoid crowded public transport.

“They are part of the solution, to make roads more fluid, even for health problems,” Jacques Gabriel Ehouo, mayor of the central business district of Plateau, told Reuters after meeting with Costa.

“Cycling can contribute to the fight against Covid-19 because social distancing is naturally respected,” he said.

Costa, who wore his helmet throughout the meeting, has big ambitions.

The prized mountain bike Burry Stander rode in the 2008 Olympics stood at the corner of Stott Street and the R102 in Shelley Beach on the ...
News
1 year ago

“Our focus was Ivory Coast, but the goal is to make Africa and the continent cyclable,” he said.

Lack of infrastructure is not the only problem. Kenya's capital Nairobi began expanding cycle lanes five years ago and is now constructing several through the heart of the business district.

But cars often encroach on the lanes, or authorities do not maintain them, so cycling is still dangerous, said Cyprine Odada, an organiser for the Nairobi chapter of Critical Mass, a global alliance of cycling organisations that campaigns for better road safety.

Despite being six months pregnant, she and hundreds of others cycled slowly through Nairobi's streets this month to commemorate a friend killed while cycling. Odada is petitioning to parliament to improve legal protections for cyclists.

WATCH | ‘I am not going to change my life’: Nick Bester on healing after trail attack

Gruelling physical exercise is so much a part of Nick Bester's life that not even broken bones from a severe beating by robbers - let alone a ...
News
1 year ago

Covid-19 might help. The pandemic triggered a surge of interest in cycling, Odada said, partly because the government ordered public minibuses to leave some seats empty for social distancing. The buses, normally hugely overcrowded, are the only affordable transport for many.

“With Covid we've had a lot of beginners reaching out, people who want to know about how safe it is to cycle in Nairobi,” she said.

In Cape Town, cycling activist Lebogang Mokwena used to get a couple of enquiries a week about teaching people to ride. Since the pandemic hit she receives them almost every day.

Cycling has been thrown into fresh turmoil after French judicial authorities opened a preliminary investigation into potential doping at French team ...
Sport
1 year ago

She has taught around 200 women to ride in the past three years, she said. Some do not have access to bikes, or might belong to cultures where women do not traditionally ride. Many perceive biking as a sport rather than a method of transport, Mokwena said.

“Black women tend not to be cyclists, not because they don't want to, but because they've never had the opportunity to learn,” she said. She only learnt to cycle at the age of 30 after moving to New York.

Mokwena is Cape Town's “Bicycle Mayor”, a designation from the global cycling advocacy group Bycs, who also have “mayors” in Nairobi and Gaberone, Botswana and Kampala, Uganda to build cycling communities and engage with local government.

Ivorian activist Costa says his main aim is to change perceptions that cycling is for the rural poor. His organisation 'MyDream for Africa' makes videos with celebrities such as soccer star Didier Drogba to promote cycling. “The bicycle is the transport of the future,” he said. — Reuters