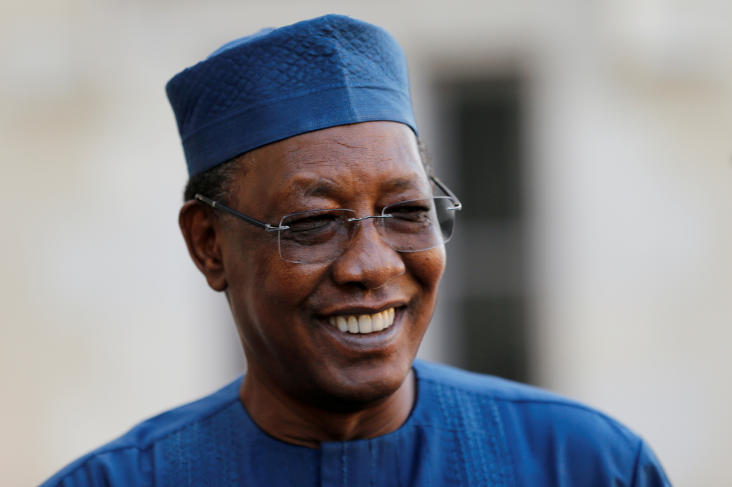 FILE PHOTO: Chad's President Idriss Deby arrives to attend a summit on the situation in the Sahel region in the southern French city of Pau, France, on January 13 2020.
Image: REUTERS/Regis Duvignau//File Photo

Voting began in Chad on Sunday in a presidential election in which Idriss Deby is widely expected to extend his three-decade rule, despite growing signs of popular discontent over his handling of the country's oil wealth.

Deby, 68, was first to cast his ballot at a polling station in the capital N'Djamena. He is one of Africa's longest-serving leaders and an ally of Western powers in the fight against Islamist militants in West and Central Africa.

“I'm calling on all Chadians to come out and vote for the candidate of their choice who will have to tackle the major challenges facing our country over the next six years,” Deby told journalists after voting.

Deby seized power in 1990 in an armed rebellion, and in 2018 pushed through a new constitution that could let him stay in power until 2033 - even as it reinstated term limits.

He has relied on a firm grip over state institutions and one of the region's most capable militaries to maintain power. He said recently he knew in advance that he would win again “as I have done for the last 30 years”.

“Many of you, my daughters and sons, were not yet born when I took power in 1990,” he said at his final campaign rally on Friday. “You have asked me to be a candidate for this sixth term.”

Among Deby's six rivals is former Prime Minister Albert Pahimi Padacke, but several leading opponents are boycotting the race, including the 2016 runner-up Saleh Kebzabo, who has vowed to make Chad “ungovernable” if Deby wins.

Several recent anti-government demonstrations in N'Djamena turned violent and there was a heavy military presence in the city on Saturday.

As soldiers patrolled the streets, municipal workers collected car tyres and plastics that protesters could set on fire.

On Friday authorities said they had arrested several people, including at least one opposition leader, for what they said was a plot to assassinate politicians and bomb polling stations and the electoral commission headquarters.

The opposition said the arrests showed mounting repression under Deby, whose government also arrested scores of people ahead of the vote, according to Human Rights Watch.

It has come under increasing public pressure over a flagging economy as low prices for the main export, oil, in recent years forced cutbacks in public spending and sparked labour strikes.

Norbert Djimadoum, a N'Djamena resident, said he expected many people to express their dissatisfaction by staying at home on Sunday.

“There won't be a lot of enthusiasm at the polls tomorrow and that will be a victory for the start of change,” he said on Saturday.