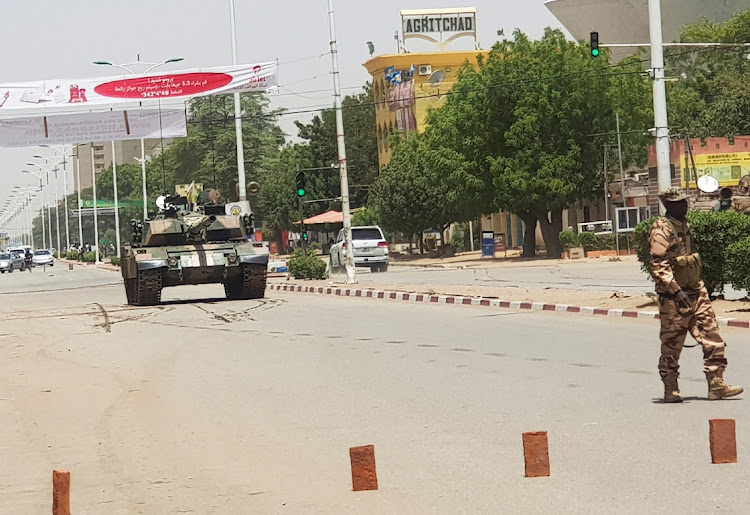 Trucks loaded with soldiers were seen patrolling the streets around central N'Djamena.
Image: REUTERS/Stringer NO RESALES. NO ARCHIVES

Tuesday's unrest underscores the tense atmosphere in Chad following Deby's death, where the military transition is already struggling to win over a population exhausted by 30 years of monolithic rule.

The military council seized power after Deby was killed as he visited troops fighting rebels on April 19.

Some opposition politicians have called the military takeover a coup and asked supporters to protest, even as the army appointed a civilian politician, Albert Pahimi Padacke, as prime minister of a transitional government on Monday.

The military council banned protests in a statement Monday evening, saying no demonstrations that could lead to disorder were allowed while the country was still in mourning.

Chad's ruling military council has rejected an offer from northern rebels for a ceasefire and talks, calling them “outlaws” who needed to be tracked ...
Africa
3 months ago

The military council, headed by Deby's son Mahamat Idriss Deby who was declared president, has said it will oversee an 18-month transition to elections.

Police responded with tear gas as protesters burned tyres in several neighbourhoods of N'Djamena early on Tuesday. A Reuters witness said that firefighters struggled to contain the blaze which was large enough to be seen from several neighborhoods away.

"We do not want our country to become a monarchy," said 34-year-old protester Mbaidiguim Marabel. "The military must return to the barracks to make way for a civil transition."

Trucks loaded with soldiers were seen patrolling the streets around central N'Djamena.

"The police came, they fired tear gas. But we are not scared," said Timothy Betouge, age 70.

The council is coming under international pressure to hand over power to civilians as soon as possible. The African Union has expressed "grave concern" about the military takeover, while France, the former colonial ruler, and some of Chad's neighbours are pushing for a civilian-military solution.

Deby's death came as Chad's military battles an insurrection by Libya-based rebels known as the Front for Change and Concord in Chad (FACT). The rebels came as close as 200-300 km (125-185 miles) from N'Djamena before being pushed back by the army.

Chad's military council rejected an offer from the rebels for peace talks on Sunday, calling them "outlaws" who needed to be tracked down and arrested for their role in Deby's death.