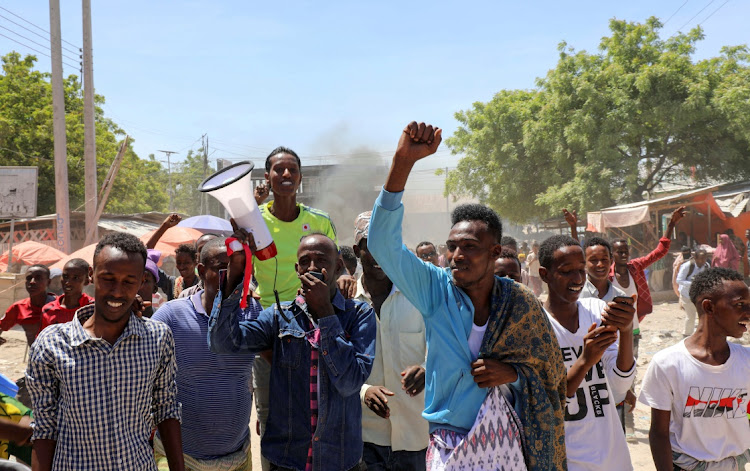 Residents of the Somali capital Mogadishu fled neighbourhoods on Tuesday fearing renewed clashes between rival factions in the security forces, who have split in a dispute over an extension to the president's term.

Forces loyal to the opposition hold parts of the city and the two sides clashed over the weekend, raising fears that al Qaeda-linked al Shabaab insurgents could exploit a security vacuum as state forces turn on each other.

Many soldiers in Somalia's armed forces owe their loyalties to clan militias which have often battled each other for power and resources.

The presidential term extension has also angered foreign donors, who have backed Mohamed's government in an attempt to bring stability to a country that has been wracked by civil war since 1991.

A former Somali leader accused his successor President Mohamed Abdullahi Mohamed of orchestrating an attack by soldiers on his home on Sunday as ...
Africa
3 months ago

"This morning, we were surprised to see more well-armed pro-opposition troops have settled in this area of Siigaale, they told us to move," said Abdullahi Mohamed, a local elder. Siigale is near Maka al Mukarama road that leads to the presidential palace.

"Last night we saw a bigger movement of the Farmajo's forces, closing in from every direction," she said, referring to President Mohamed by his nickname.

"We did not want to be caught up in the anticipated battle."

"We request the forces to return our equipment and not mistreat us again," Ahmed Isse Gutale, the manager of Mustaqbal Media, told Reuters.

Gunshots rang out late on Friday in Somalia's capital Mogadishu, witnesses said, when government troops approached the home of the city's former ...
News
3 months ago

Overnight, Reuters journalists saw large numbers of government troops deployed in strategic locations, including near the house of opposition presidential candidate Abdirahman Abdishakur, where clashes took place on Sunday, and in the Gashandhiga area, which is where the military is headquartered.

Meanwhile, some opposition forces moved from the Hodan district to Hawle Wadag district, according to Reuters reporters, a part of the city where hotels, businesses and schools can be found.

The political crisis distracts attention from the fight against the Islamist al Shabab insurgency, which has killed thousands of civilians in the region in the past 12 years.

African Union peacekeepers had clawed back control of the capital from the insurgency and international donors have been trying to develop Somalia's fledgling institutions after more than two decades as a failed state.