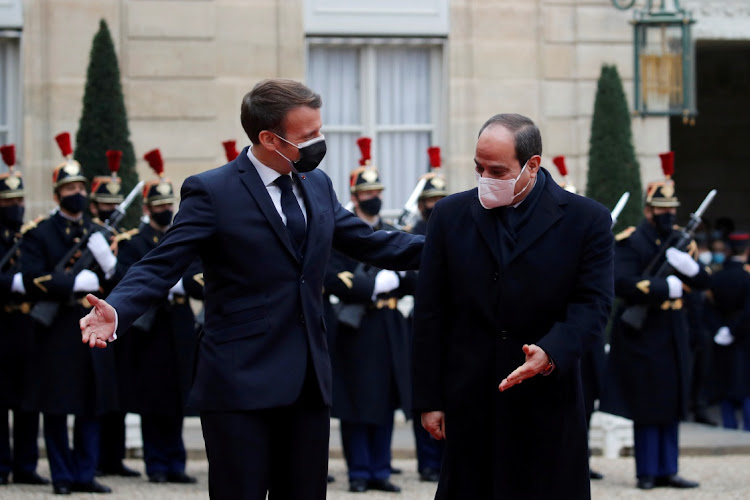 FILE PHOTO: Benedicte Jeannerod (not in the picture), Human Rights Watch Director for France, said Sisi's (R) government was presiding over the worst repression in Egypt in decades. "By signing a mega-arms contract ... France is only encouraging this," she told Reuters late on Monday.
Image: REUTERS/Gonzalo Fuentes/File Photo

France said on Tuesday it will begin delivering 30 Dassault warplanes to Egypt from 2024 in a 4 billion euro ($4.8 billion) deal, as it strengthens ties with a partner it considers vital in fighting Islamist militants.

In December, President Emmanuel Macron drew criticism from rights groups when he said he would not make the sale of weapons to Egypt conditional on human rights because he did not want to weaken Cairo's ability to counter militancy in the region.

Armed Forces Minister Florence Parly said the deal, confirmed on Tuesday, illustrated the "strategic nature of the partnership" between the countries and would secure 7,000 jobs in France over three years.

"Our two countries are resolutely committed to the fight against terrorism and work for stability," she said.

Egypt's military has expanded its domestic status and influence under Abdel Fattah al-Sisi, a former army chief who has been president since 2014, waging operations against militants in the Sinai Peninsula.

Benedicte Jeannerod, Human Rights Watch Director for France, said Sisi's government was presiding over the worst repression in Egypt in decades. "By signing a mega-arms contract ... France is only encouraging this," she told Reuters late on Monday.

Egyptologists uncover rare tombs from before the Pharaohs

Egyptian archaeologists working on the Nile Delta have uncovered dozens of rare predynastic tombs dating to the period before Egypt's Pharaonic ...
Africa
4 months ago

France concluded more than 7.5 billion euros in arms deals with Egypt between 2010-2019, including 24 of the same warplane, the Rafale, in 2015 in what was its first export sale.

However, contracts had dried up, with diplomats citing concerns about Cairo's long-term ability to repay state-backed guaranteed loans and cooling relations between Macron and Sisi.

A French official said financing for the deal would be finalised on Tuesday with up to 85% guaranteed by the French state.

"We consider Egypt to be a credible client," the official said, pointing to its previous track record with France when asked about fears of a potential default, and saying there was a continued dialogue with Egypt over human rights.