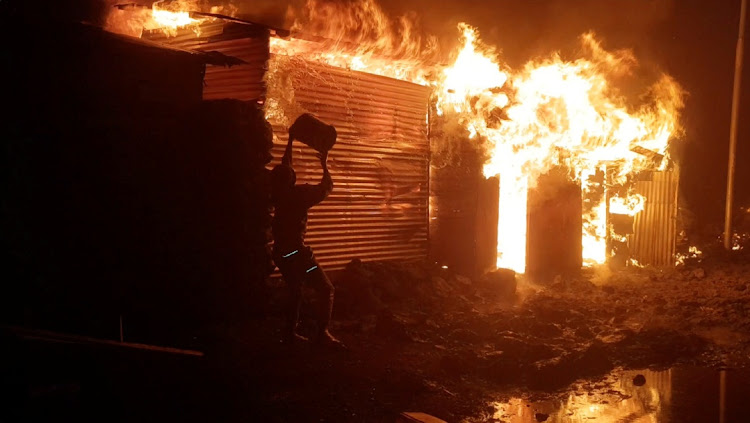 A person attempts to extinguish a blazing building after the volcanic eruption of Mount Nyiragongo near Goma, the Democratic Republic of Congo, in this image from video obtained via social media.
Image: REUTERS/ ENOCH DAVID

Mount Nyiragongo in eastern Democratic Republic of Congo (DRC) erupted on Saturday night, leaving a trail of destruction and about 13 people dead as the lava flow halted just short of the city of Goma.

The city was thrown into panic as Mount Nyiragongo, one of the world's most active and dangerous volcanoes, sent a wall of orange lava downhill towards the lakeside city of about 2-million people.

Hundreds of buildings were destroyed and army spokesperson Guillaume Njike said 13 people were killed fleeing the disaster, including nine in a traffic accident and four who tried to escape Munzenze prison in Goma. The figure is expected to rise.

A Reuters reporter saw two people killed by the initial eruption in a village north of Goma, and witnesses spoke of dead and missing relatives.

Haunted by memories of an eruption in 2002 that killed 250 people and left 120,000 homeless, residents fled on foot with their belongings, some towards the nearby border with Rwanda.

The International Federation of Red Cross said that between 3,000 and 5,000 people fled into Rwanda on Saturday, many of them villagers and farmers with livestock. Some began returning on Sunday.

On Sunday a black gash about 800m wide could be seen on the outskirts of Goma, where the lava had cooled to rubble. At some points it was three storeys high.

Residents in the Buhene district sorted through the mangled remains of buildings on Sunday. The cleanup is expected to take months.  Elsewhere, groups of people posed for photos near the steaming lava.

Ernestine Kabuo, 68, said she had tried to carry her sick husband from their house as the lava approached, but he was too unwell to leave. “I said to myself, I can't go alone, we've been married for the best and for the worst,” she said. “I went back to at least try to get him out but couldn't. I ran away and he got burnt inside.” 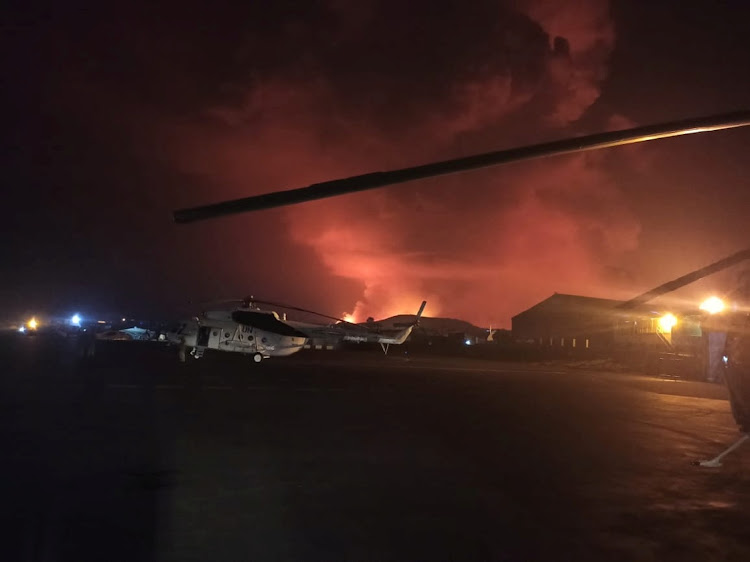 A view of Goma International Airport shows flames from the volcanic eruption of Mount Nyiragongo near Goma, in the Democratic Republic of Congo, on May 22 2021.
Image: REUTERS/ MONUCO

The flow towards Goma stopped a few hundred metres from the city limits. The nearby airport was untouched. A separate lava flow that headed east over unpopulated terrain towards Rwanda also appeared to have stopped.

“Local authorities who have been monitoring the eruption overnight report that the lava flow has lost intensity,” government spokesperson Patrick Muyaya said on Twitter on Sunday.

Still, authorities warned that the danger was not over and that seismic activity in the area could cause further lava flows.

Lava crossed a main road out of Goma overnight, cutting it off from cities to the north. Traffic was in gridlock in most places as people tried to leave or return to assess the damage to their homes.

A fissure 500 to 750 meters long opened at the eruption site, spewing lava fountains up to 100 meters high, Bjarki Friis of the meteorological office ...
News
3 months ago

Experts were worried that the volcanic activity mirrored that in the years preceding eruptions in 1977 and 2002.

Volcanologists at the OVG observatory, which monitors Nyiragongo, have struggled to make regular basic checks since the World Bank cut funding amid embezzlement allegations.

From October 2020 to April, the observatory could not carry out comprehensive seismic checks on the volcano because analysts lacked an internet connection, OVG’s scientific director Celestin Kasereka Mahinda told local Radio Okapi on Sunday.

Internet was restored in April thanks to funding from a US partner, he said, but by that stage too much time had been lost.

“As soon as the internet was restored, we had started recording the warning signals, but since we did not have previous data, we thought it was the start of volcanic activity. Hence this surprise.”