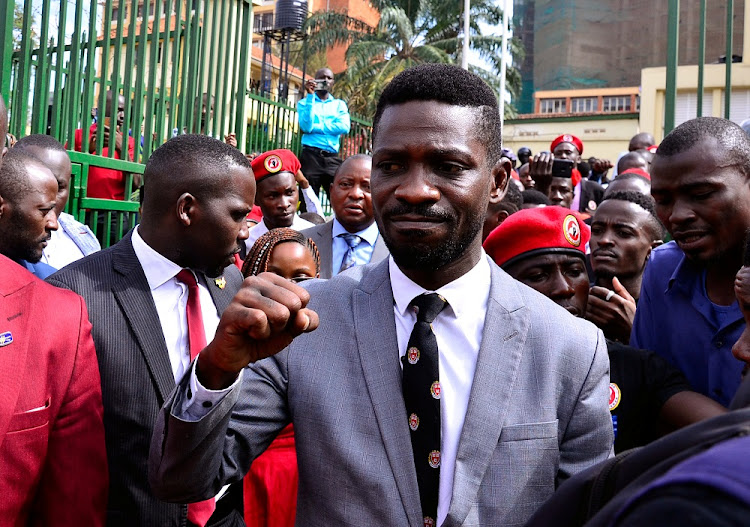 Wine, 39, whose real name is Robert Kyagulanyi, has over the last three years galvanized a large support base, especially among the country's youth, provoking a deadly crackdown from the government of veteran leader, Yoweri Museveni, 76.
Image: Abubaker Lubowa/Reuters/ File photo

A Ugandan military court on Monday released on bail 18 supporters of singer-turned-opposition leader Bobi Wine detained since the start of the year on charges lawyers and government critics say are politically motivated.

"They were granted bail, so for now they have some temporary freedom," their lawyer, George Musisi, told Reuters.

The move follows the release on May 25 of a first batch of 17 activists from a group of 35 originally detained on Dec. 30 for violating Covid-19 restrictions on gatherings.

They were subsequently charged in a military court with weapons offences, even though all the accused are civilians.

Wine, 39, whose real name is Robert Kyagulanyi, has over the last three years galvanized a large support base, especially among the country's youth, provoking a deadly crackdown from the government of veteran leader, Yoweri Museveni,76.

Uganda army to join Congo in offensive against Islamist rebels

The Ugandan and Congo armies are setting up an operations centre in the east of Democratic Republic of Congo for a joint offensive against Islamist ...
Africa
1 year ago

He stood against Museveni in the country's Jan. 14 presidential election, but results released by the electoral body said he had lost to Museveni.

Wine rejected the results, alleging ballot stuffing, intimidation of his supporters and falsification of ballot tallies. The US also said the poll was not credible and has sanctioned officials. The government denied election fraud.

Since last year security forces have detained hundreds of Wine's supporters for interrogations, according to rights activists, the government and opposition officials. Some of those detained have been freed, while others who were detained have not been traced anywhere in official detention facilities.

Those released on Monday include Wine's long term singing partner Nubian Li, with whom he has sung ballads alleging violence against the opposition and other rights abuses.

"These young people spent six months in jail over charges that were simply punishment for supporting the opposition," Musisi said.

Museveni has led the east African country since 1986 and is currently Africa's fourth longest ruling leader. He has previously dismissed allegations about abuses.