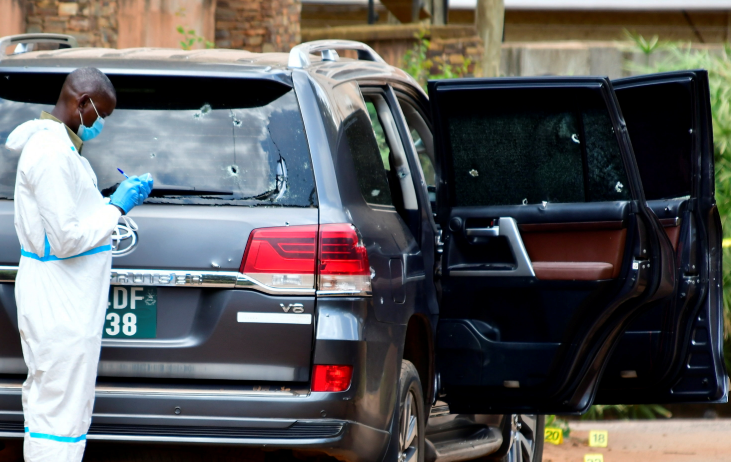 A forensic expert records bullet holes on a vehicle at the scene of an attempted assassination on Ugandan minister of works and transport General Katumba Wamala, in which he was wounded and his daughter and driver killed, an army spokeswoman and local media reports said, in the suburb of Kiasasi within Kampala, Uganda on June 1, 2021.
Image: REUTERS/ ABUBAKER LUBOWA

Two suspects were charged with murder and attempted murder on Monday over an assassination attempt on a Ugandan government minister in which the minister was wounded and his daughter and driver were killed.

Early on June 1, masked gunmen on motorcycles intercepted Katumba as he travelled through Kisaasi, a suburb of the capital Kampala.

They sprayed his vehicle with bullets, killing his daughter and driver but aborted the attack when Katumba's bodyguard shielded him and fired back. The bodyguard was unhurt.

Katumba is a former head of Uganda's military and a former chief of the police. The police have been accused of human rights abuses by rights groups, which say they have made arbitrary arrests and tortured opposition activists. The police deny the accusations.

There have been several unsolved assassinations and mysterious deaths of high profile officials in the east African country in recent years that have fuelled speculation about perpetrators and their motivation.

Victims have involved a lawmaker, a senior police officer, a public prosecutor, senior Muslim leaders and others. Nearly all were committed by gunmen on motorcycles though in most cases charges have eventually been dropped by prosecutors or dismissed by judges for lack of evidence.