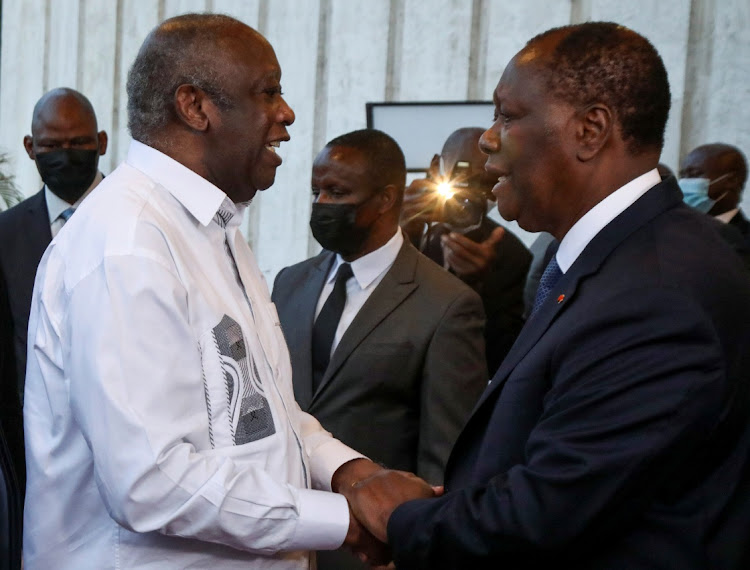 Ivory Coast President Alassane Ouattara and long-time rival Laurent Gbagbo hugged on Tuesday at their first meeting in over a decade, part of efforts to ease political tensions in the West African country.

“I'm happy to see you,” Ouattara said as he welcomed the former president at the presidential palace in Abidjan, the economic capital of the cocoa-producing country.

They hugged before taking off the protective face masks they were wearing because of the Covid-19 pandemic and smiled for the cameras while holding hands.

Ivory Coast has for more than a decade faced political tension, mistrust and violence. A 2010-11 civil war killed over 3,000 people as the two men vied for power.

The civil war began after Gbagbo, now 76, refused to concede electoral defeat to Ouattara in December 2010, and he was arrested following the war. He returned from exile in June after being acquitted by the International Criminal Court of war crimes.

Gbagbo said he had urged Ouattara to continue reconciliation efforts by freeing other prisoners from the civil war period.

“I told the president — and you will agree with me — I was their leader and I am out today. They are in prison. I would like the president to do all he can to free them,” Gbagbo told a joint news conference.

Though Ouattara's government paved the way for Gbagbo to return, he still faces a 20-year prison sentence handed down in November 2019 on charges of misappropriating funds from the regional central bank during the crisis period.

Ivory Coast's former president Laurent Gbagbo boarded a flight in Brussels on Thursday to return home for the first time since he was ousted from ...
Africa
3 months ago

The government has not said whether it plans to enforce the verdict, or whether Gbagbo has been pardoned.

Ouattara said he and Gbagbo would continue to meet, and invited others to join them, probably after August.

“It is important for everyone to know that we have decided to restore trust and ensure that Ivorians reconcile and trust each other as well. The past events have been painful. Too many died and we must try to put that behind us,” Ouattara said.