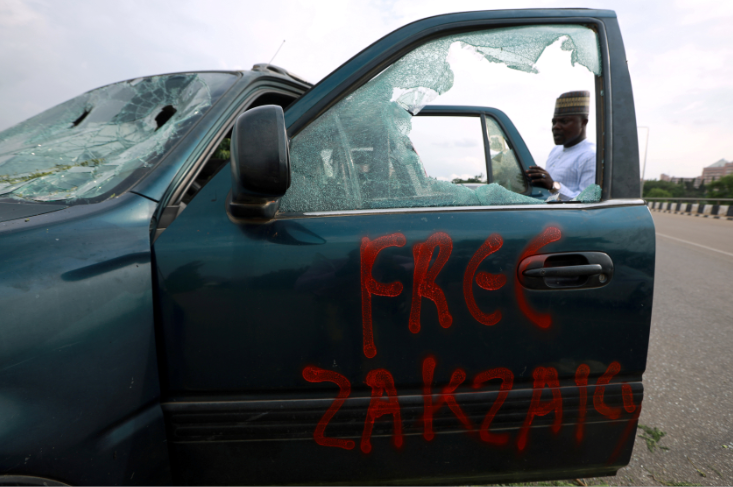 "Free Zakzaky" reads on a damaged car outside the National Assembly in Abuja, Nigeria on July 9 2019.
Image: REUTERS/ AFOLABI SOTUNDE

A Nigerian court on Wednesday acquitted Ibrahim Zakzaky, leader of the Islamic Movement in Nigeria (IMN), a banned Shi'ite group, of all eight criminal charges against him, defence and prosecution lawyers said.

Zakzaky and his wife, Zeenah, had been in detention since 2015 when he was arrested after a clash in which the army killed an estimated 350 people at an IMN compound and a nearby mosque and burial ground in northern Kaduna state.

The couple had been facing a range of charges filed by the state government in 2018, including aiding and abetting homicide, unlawful assembly and disruption of public peace.

Justice Gideon Kurada ruled there were no charges to answer and acquitted the pair. Prosecution lawyer Dari Bayero confirmed the ruling. A Reuters witness saw the couple leave the courthouse in a van driven by supporters.

Police fired teargas and detained several demonstrators in the Nigerian cities of Lagos and Abuja on Saturday during protests over the country's ...
News
1 year ago

IMN spokesman Ibrahim Musa said the ruling "a victory for perseverance in the face of extreme persecution." Zakzaky's supporters at the courthouse said they feared police would re-arrest him following his release.

The police and Nigeria's attorney general did not immediately respond to requests for comment.

The government banned IMN in 2019 after a series of protests calling for Zakzaky's release turned deadly.

Shi'ites are a small minority in Nigeria, where around half the population are Muslim, overwhelmingly Sunni.