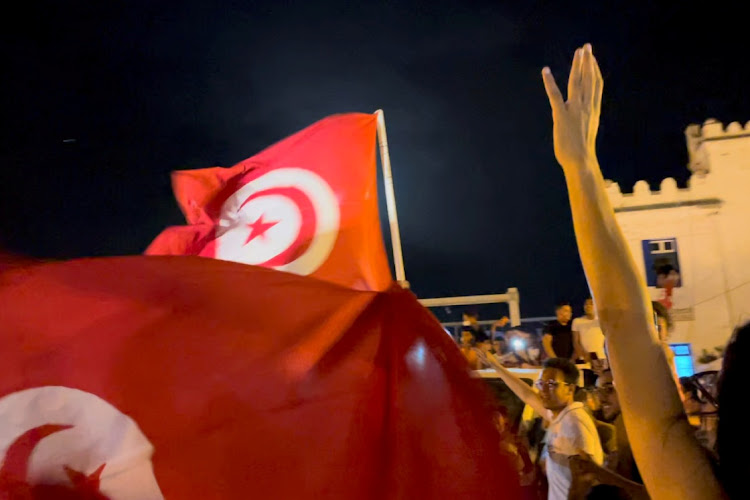 Saied's move to seize executive control appears to have widespread popular support in Tunisia, where years of misgovernance, corruption, political paralysis and economic stagnation have been aggravated this year by a deadly surge in Covid-19 cases. THIS IMAGE HAS BEEN SUPPLIED BY A THIRD PARTY. MANDATORY CREDIT. NO RESALES. NO ARCHIVES
Image: Layli Foroudi/via REUTERS

Tunisia's president promised on Friday he would not turn into a dictator and rejected accusations he had staged a coup, as two parliament members were arrested following his decision to lift their immunity when he seized control of government this week.

Tunisia has been thrust into a political crisis by President Kais Saied's move on Sunday to dismiss the prime minister and freeze parliament for 30 days, leading major parties to accuse him of a coup.

Saied has yet to carry out steps that critics say are needed to reassure Tunisians, including the appointment of an interim prime minister and a roadmap to end the emergency measures.

"I know the constitutional texts very well, respect them and taught them and after all this time I will not turn into a dictator as some have said," the presidency quoted the former law professor saying.

Concerns over rights and freedoms in Tunisia, a democracy since the 2011 revolution, rose on Friday after the arrest of parliamentarian and influential blogger Yassin Ayari and the announcement of investigations into alleged violence by people protesting Saied's actions during a demonstration on Monday.

Tunisia's foreign minister phoned his counterparts in Turkey, France, Italy, Germany, the EU and High Commissioner for Human Rights to reassure them ...
Africa
1 year ago

The military judiciary said Ayari had been imprisoned by a judicial ruling issued three years ago for defaming the army. Saied on Sunday removed the immunity of parliament members, leaving any with cases against them vulnerable to arrest.

Another member of parliament, Maher Zid of the conservative Muslim Karama party, was detained late on Friday, according to his lawyer, after being sentenced to two years in prison in 2018 for offending people on social media and insulting the then president.

On Monday, the biggest party in parliament, the moderate Islamist Ennahda, held a sit-in outside parliament after it was surrounded by the army. Hundreds of supporters of Ennahda and Saied confronted each other, some throwing stones or bottles.

The judiciary said it had opened investigations into four people linked to Ennahda for "attempting to commit acts of violence" during the protest, including a member of a party council and two members with connections to its leader.

Tunisia faced its biggest crisis in a decade of democracy on Monday after President Kais Saied ousted the government and froze the activities of ...
Africa
1 year ago

Saied's move to seize executive control appears to have widespread popular support in Tunisia, where years of misgovernance, corruption, political paralysis and economic stagnation have been aggravated this year by a deadly surge in Covid-19 cases.

The United States on Friday delivered 1 million doses of the Moderna vaccine to Tunisia through the Covax programme, the US embassy in Tunis said.

Saied on Friday moved the country's Covid-19 nightly curfew back to 10 p.m. from 7 p.m. Despite the political crisis, there have been no signs of unrest in Tunisia since the protest outside parliament on Monday.

Washington has been a vocal supporter of Tunisian democracy since the revolution.