African scientists on the rise

From leading the response to the COVID-19 pandemic to combating malaria, TB and HIV, more African scientists are at the forefront of important knowledge breakthroughs, technologies and solutions for everyday life than ever before. 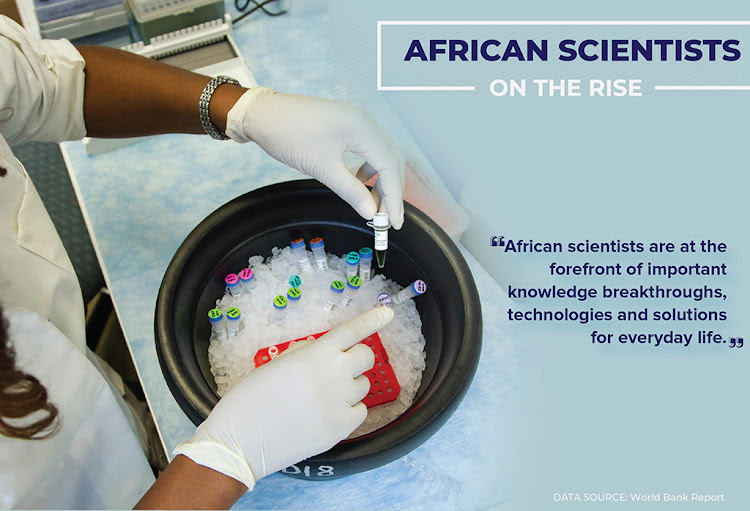 African scientists are staking a claim at the world’s scientific high table, generating cutting-edge breakthroughs in the fight against malaria, HIV/AIDS, maternal health and TB and boosting agricultural productivity.

Despite little global spotlight − at home where it matters, as well as overseas – African scientists are creating home-grown solutions to some of the world’s biggest maladies.

The World Bank has released a report indicating that despite an increase, Africa’s contributions to the world’s research remains at a measly 1.1 per cent.

But there are caveats. One is that the research that IS created is extremely wide-reaching, showing scientists to be involved in a myriad of society's most pressing needs, research and advancements.

The second is that the bulk of new knowledge is produced by African scientists working abroad whose work often do not tally into the continent’s total, according to South Africa's Business Live.

Also, the sum of knowledge generated each year, including Africa’s contribution to it, is measured using research articles published in scientifically recognised journals.

“This means some of the actual work that’s being done isn’t getting the attention or credit it deserves, yet. The journal system is not a perfect way of assessing scientific productivity. For now, though, it’s a means that can be applied fairly to document peer-reviewed research from around the world,” reads the South African publication in part.

A Zimbabwean scientist has set up a research institute as a way of turning to science to find solutions to the country's healthcare challenges.
Africa
3 months ago

While one in three African scientists have been leaving the continent each year, a new trend is emerging where more are returning, fuelled by a renewed sense of pan-Africanism and better scientific funding in host states.

More African governments have doubled investment towards the development of science and technology, an area deemed vital for economic takeoff, yet long-neglected and poorly funded.

In the wake of the COVID-19 pandemic, scientists on the continent surprised the world by leading the onslaught against the viral contagion.

A case documented by the World Bank shows how a Nigerian biologist was able to generate the first genome sequence of coronavirus within 48 hours, faster than it takes in some developed countries.

“The patient was an Italian man living in Nigeria, who had just returned from Milan in Italy, which was then a cluster for the disease in Europe. Shortly after the patient was identified, a sample of the virus was sent to a small town called Ede, located in Osun State, southwestern Nigeria, over 200 kilometres away from Lagos,” the World Bank documented.

“There, a team led by Professor Christian Happi, analyzed the sample and was able within 48 hours to share the very first genome sequence of the severe acute respiratory syndrome coronavirus 2 (SARS-CoV-2) from Africa with the global science community— faster than what was being done in some developed countries and, more importantly, much faster than sending it to a laboratory overseas.”

African countries, many of which are heavily reliant on mining, have criticised a move by the tiny Pacific island nation of Nauru to fast-track ...
Africa
1 month ago

Teams like that of Professor Happi are not alone. African researchers have been working on challenges as varied as astrophysics, malaria, HIV/AIDS and agricultural productivity.

Professors Salim and Quarraisha Abdool Karim have won African and international awards for their groundbreaking and lifesaving work in the area of HIV/AIDS, according to Memeburn, a Cape Town-based, startup-focused news site.

Similarly, Professor Glenda Gray, the CEO of South Africa’s Medical Research Council, has been honoured by Time magazine as one of the world’s 100 most influential people. She, too, is a pioneer in HIV/AIDS research.

Africa has come a long way in shaking off the image of a continent that is consistently dependent on the rest of the world for investment, ...
News
3 months ago