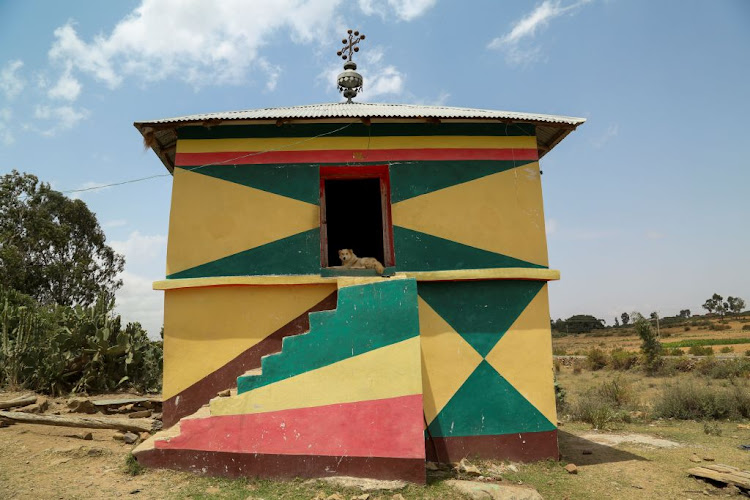 A church on the outskirts of Hawzen town in north central Tigray, Ethiopia, on July 11 2021. Residents said many Tigrayan fighters had been buried in local churches similar to this one in the town of Hawzen. Reuters did not see the graves.
Image: REUTERS/ Giulia Paravicini

At least 30 corpses have washed up on the Sudanese banks of a river that abuts Ethiopia's northern region of Tigray, according to two Ethiopian refugees and four Sudanese witnesses who told Reuters on Monday they had retrieved the bodies.

The bodies were found in the Setit River, known in Ethiopia as the Tekeze, which is the current de facto borderline between territory controlled by Tigrayan forces and those controlled by Amhara forces allied with Ethiopia's federal government.

At a different point the river also separates Sudan from Ethiopia.

Dr. Tewodros Tefera, a surgeon who escaped from the Ethiopian border town of Humera, told Reuters he buried 10 bodies over the past six days in Sudan and was told by local fishermen and refugees another 28 had been recovered, including seven on Monday.

More than 100,000 children in Ethiopia's Tigray could die of hunger- UNICEF

The United Nations children's agency said on Friday that more than 100,000 children in Ethiopia's northern region of Tigray could suffer ...
Africa
5 months ago

“They were shot in their chest, abdomen, legs ... and also had their hands tied,” he said, adding that he had been able to identify three bodies belonging to Tigrayans from Humera, with the help of refugees. Many Tigrayans from Humera fled into Sudan when the fighting began.

He shared two videos showing men digging a grave for a body that washed up on the shore and men burying what appears to be the same body in the freshly dug grave.

An Ethiopian refugee from Humera, who asked for anonymity for fear of repercussions for his family still in Ethiopia, said he found nine bodies.

“We found nine ... They tied them up with a rope and they were swollen, but there’s no marks of them being hit or shot,” he said.

He shared pictures showing bruised and swollen corpses lying on the banks of the river.

Forces in Ethiopia's northern Tigray region have released around 1,000 government soldiers captured during recent fighting, the head of its ruling ...
Africa
6 months ago

Redwan Hussein, head of the Ethiopian government’s emergency task force on Tigray, and Colonel Getnet Adane, Ethiopia's military spokesperson, did not respond to a WhatsApp message for comment on the bodies.

Billene Seyoum, the Ethiopian prime minister’s spokesperson, did not respond to a request for comment.

On Monday, an Ethiopian government-run Twitter account said accounts of floating bodies circulating on social media were due to a fake campaign by Tigrayan “propagandists”.

But the accounts of the Ethiopian refugees were bolstered by witnesses in Sudan. Two local Sudanese officials and two Sudanese residents of the town of Wad Alhilew village, near the Setit dam in Kassala state, who asked not to be named for fear of reprisals, said they had retrieved about 20 bodies from the Setit river: five on Monday, nine on Sunday and six on Saturday.

Prime Minister Abiy Ahmed's Prosperity Party won the most seats in Ethiopia's parliamentary election, the election board said on Saturday, a victory ...
Africa
6 months ago

Some of the bodies had been shot, others were tied up by their hands but without other visible injuries, the four told Reuters. The village is about 42 kilometres from Hamdayet camp in Sudan, where the Ethiopian refugees found the bodies.

War erupted eight months ago between Ethiopia's central government and the Tigray People's Liberation Front (TPLF), the party that controls Tigray. Tigrayans have previously accused Amhara forces allied to the central government of dumping bodies there, accusations they deny.

In recent weeks fighting has spread from Tigray into Amhara and Afar, two regions neighbouring Tigray, risking a further destabilisation of Africa's second most populous nation.