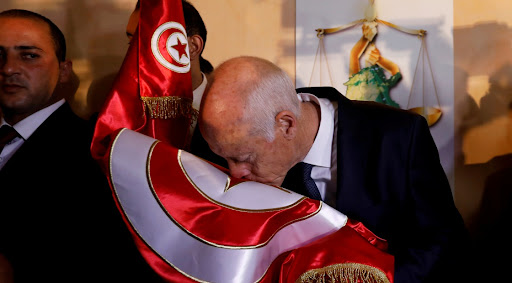 More than seven weeks after his intervention thrust Tunisia into its biggest political crisis since introducing democracy in a 2011 revolution that triggered the Arab Spring, Saied has yet to name a new prime minister or declare his future intentions.
Image: REUTERS/ Zoubeir Souissi

Tunisia's President Kais Saied said on Tuesday he would not do deals with those he described as “traitors”, an apparent reference to the moderate Islamist Ennahda party, the biggest in the suspended parliament.

Ennahda has called for a national dialogue to find a way forward after Saied on July 25 dismissed the prime minister, froze parliament and seized governing powers, moves the party has called a coup.

“I will not deal with.. traitors and those who pay money to offend their country. No dialogue with them,” he said in a video that was posted online by the presidency.

Tunisia's President Kais Saied on Saturday indicated he was preparing to change the country's constitution, but said he would only do so using ...
Africa
4 months ago

Local media have reported that Ennahda had paid a foreign lobbying company, something it denied doing.

“They paid nearly 3-million dinars to foreign lobbying groups to harm their country,” said Saied in the video, without naming Ennahda.

More than seven weeks after his intervention thrust Tunisia into its biggest political crisis since introducing democracy in a 2011 revolution that triggered the Arab Spring, Saied has yet to name a new prime minister or declare his future intentions.

Last week one of his advisers told Reuters he was planning to suspend the constitution and offer an amended version for a public referendum.

The powerful labour union UGTT rejected that approach the following day and Saied then said any amendments to the constitution must be made within the existing constitutional framework.

A heat spike across northern Tunisia caused record temperatures on Tuesday including a sweltering 49 °C (120 degrees Fahrenheit) in the capital ...
Africa
5 months ago

The union, as well as Ennahda, other political parties and Western democracies that have supported Tunisian public finances, have all urged him to quickly name a new government and to return to the constitutional order.

Saied, in his comments on Tuesday, said: “The government is important. But what is more important is how this government will work”.