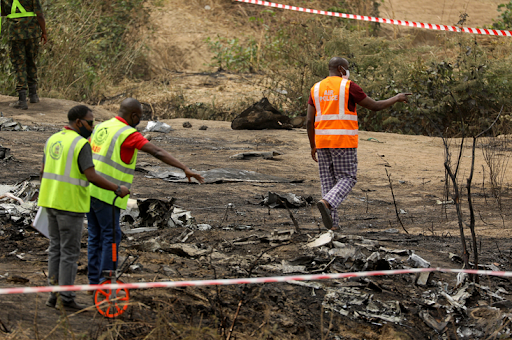 The air force, after initially denying involvement in the incident, said it may have killed and injured civilians by mistake.
Image: REUTERS/ AFOLABI SOTUNDE

The Nigerian air force said on Thursday it may have killed and injured civilians while pursuing suspected Islamist insurgents in the northeast, in an incident that local authorities said left nine people dead.

Another 23 people from the village of Buwari, including five children, were injured on Wednesday, the State Emergency Management Agency in Yobe State said, after what it described as reports of a strike.

The Nigerian armed forces are fighting two Islamist insurgent groups in the northeast, Boko Haram and Islamic State's West African Province (ISWAP), in a conflict that has killed 350,000 people and made millions dependent on aid.

Seventy-five children who were kidnapped from their school in Nigeria's northwestern Zamfara state have been released after their abductors came ...
Africa
8 months ago

The air force, after initially denying involvement in the incident, said it may have killed and injured civilians by mistake.

Air Commodore Edward Gabkwet said a fighter jet had responded to intelligence on suspicious movements of suspected insurgents from Boko Haram or ISWAP on Wednesday and fired “some probing shots”.

“Unfortunately reports reaching Nigerian Air Force headquarters alleged that some civilians were erroneously killed while others were injured,” he said in a statement.

“Therefore a board of inquiry has been set up to thoroughly investigate the circumstances of the incident.”

Three residents in Yobe's Yunasari local government area, where Buwari is located, told Reuters that an air force jet had flown over the village on Wednesday morning before there were explosions.

Nigerian officials cut communication lines in multiple parts of Katsina state as a crackdown on banditry in the northwest of the country spreads.
Africa
8 months ago

“We saw it hovering around the village and suddenly we heard two loud bangs,” resident Ibrahim Goni told Reuters by phone.

One resident said he had lost four of his relatives while another said his mother and niece had died in the incident.

The emergency response agency said food parcels and cash had been distributed to relatives and survivors in the village and that authorities had tried to subdue panic among residents.