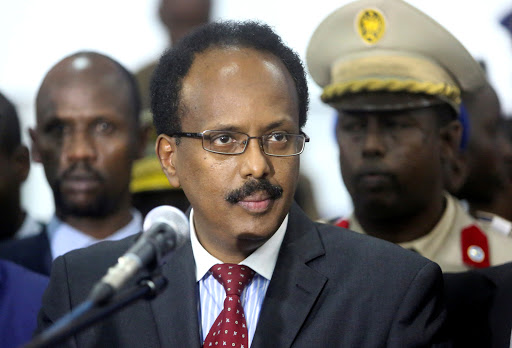 Somalian President Mohamed Abdullahi Mohamed has suspended the prime minister's power to hire and fire officials, he said in a statement on Thursday, escalating a destabilising row in the Horn of Africa nation.

The dispute between Mohamed and Prime Minister Mohammed Hussein Roble, nominally over a murder investigation, has generated months of tension in a country riven by militant attacks and clan rivalries.

“The prime minister violated the constitution,” the president said in the statement, saying the suspension would last until the conclusion of elections later this year.

Somalia on edge as president, PM clash over intelligence chief

Somalia's two most powerful leaders were locked in a standoff on Wednesday after they named different men to head the politically unstable Horn of ...
Sport
8 months ago

Roble said he would not abide by the president's order and accused him of twisting the constitutional provisions he cited to justify his interference with the powers of the prime minister's office.

“The prime minister reminds the president to preserve the principles of the constitution of the separation of powers of the government's institutions,” he said in a statement issued by his office.

Mohamed and Roble first clashed in April, when the president unilaterally extended his four-year term by two years, prompting army factions loyal to each man to seize rival positions in the capital, Mogadishu.

The confrontation was resolved when the president put Roble in charge of security and organising delayed legislative and presidential elections. That process was supposed to be concluded next month but was pushed back again last week.

Somalia's president has appointed a new head of intelligence, his office said late on Tuesday, intensifying a row with the prime minister, who had ...
Africa
8 months ago

Roble has accused Mohamed of “obstructing effective investigation” of the case of Ikran Tahlil Farah, an agent of the National Intelligence Service Agency who went missing while working in the agency's cybersecurity department.

Farah's family has said it believes she was murdered, while the agency has not commented on the case.