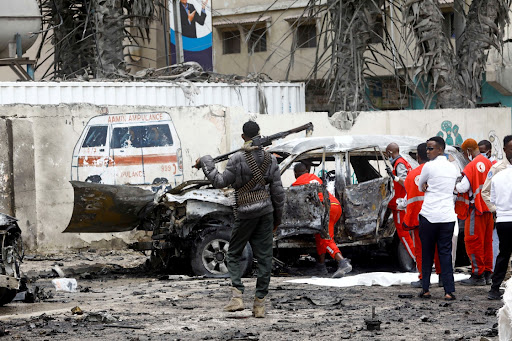 A police officer keeps watch as Red Crescent workers remove the body of a victim at the scene of a suicide car bomb explosion near the president's residence, in Mogadishu, Somalia, September 25, 2021.
Image: REUTERS/Feisal Omar

A suicide car bomb killed at least eight people in the Somali capital on Saturday at a street junction near the president's palace, police said, and al Qaeda-linked al Shabaab said it was behind the attack which targeted a convoy going into the palace.

Police spokesperson Abdifatah Aden Hassan told reporters at the scene of the blast the casualties could be higher, since some of the dead and wounded had been taken away by their relatives.

“Al Shabaab is behind the blast. They killed eight people including a soldier and a mother and two children. Al Shabaab massacres civilians,” he said.

Al Shabaab, which wants to overthrow the government and impose its interpretation of Islamic law and frequently carries out such bombings, confirmed the group was behind the attack.

A Reuters witness at the scene of the attack reported seeing seven cars and three rickshaws destroyed by the blast, and the whole junction covered in blood.

A suicide bomber killed six police officers in front of a district police station in the Somali capital Mogadishu late on Sunday, police said, in an ...
Africa
1 year ago