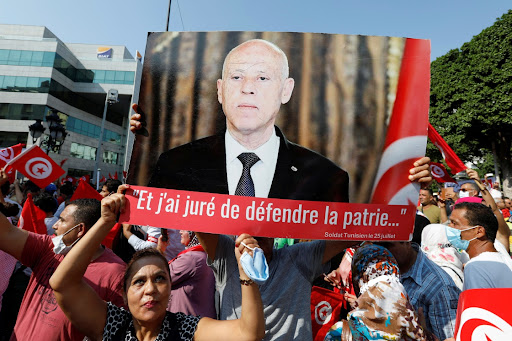 Supporters of Tunisian President Kais Saied rally in support of his seizure of power and suspension of parliament, in Tunis, Tunisia, October 3, 2021.
Image: REUTERS/Zoubeir Souissi

Tunisia's independent media regulator said on Wednesday it had closed an unlicensed television station that has been strongly critical of President Kais Saied since he seized most powers in July in a move his foes call a coup.

“It is broadcast without a licence ... the law will apply to all television stations outside the law,” Nouri Lajmi, the head of the regulator, told Reuters.

Zaytouna is one of several broadcasters that have operated for years without a licence, angering media watchdogs that saw them as illicit tools for political influence. The station said police had raided its headquarters and seized equipment.

However, since Saied seized executive power in July, critics may see any moves against media that oppose him as an attempt to undermine Tunisia's extensive press freedom.

Tunisia's President Kais Saied said on Tuesday he would not do deals with those he described as "traitors", an apparent reference to the moderate ...
Africa
4 months ago

Zaytouna is seen as close to the moderate Islamist Ennahda, the biggest party in parliament and the most vocal critic of Saied since his July 25 intervention.

"(The closure) has nothing to do with the exceptional measures announced by the president,” said Lajmi.

Zaytouna's editor Lotfi Taouati said he believed the move was indeed related to the president's actions.

“The decision is to punish us for recent positions on the president's decisions... and the strong criticism of what happened since July,” he told Reuters.

The second-largest party in parliament, the populist Heart of Tunisia, is headed by Nabil Karoui, the owner of Nessma television station which has resisted state efforts to close it for several years because it lacks a licence. Heart of Tunisia has also been vehemently critical of Saied.

Another television station, Hannibal, and a religious radio station, also operate without licences.