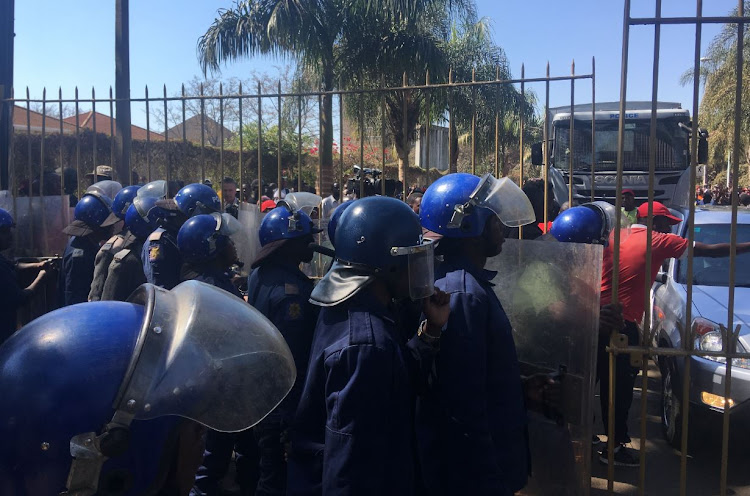 The Zimbabwe Republic Police (ZRP) have banned the carrying of traditional weapons for three months, at a time the country is experiencing a sudden rise in political violence.
Image: Ray Ndlovu

The Zimbabwe Republic Police (ZRP) have banned the carrying of traditional weapons for three months, at a time the country is experiencing a sudden rise in political violence.

Police officers commanding the country’s 10 provinces issued statements simultaneously to the effect that if one is found in public with catapults, machetes, axes, knives, swords, knobkerries, spears or daggers one could jailed for up to six months.

“For the avoidance of doubt, it is declared that in terms of Section (4) 4 of the Public Order and Security Act (chapter 11:17) any person failing to comply with such a prohibition made under section (1) shall be guilty of an offence and liable to a fine not exceeding level five or imprisonment for six months, a fine or both,” read the police statement.

The police said carrying such weapons was likely to cause public disorder. The ban took effect on Wednesday and will run up to January 19 next year.

If anyone doesn't need reminding that banknotes are just worthless pieces of paper, it is Zimbabweans: more than a decade ago, they watched as ...
Africa
8 months ago

A think-tank and advocacy organisation on electoral and democracy issues in Zimbabwe, Electoral Resource Centre (ERC), noted that political violence was on the rise and instigators must be prosecuted.

“Acts of intimidation and inter or intra party-political violence should not be tolerated in a democracy, and those responsible for instigating such violence should be brought to justice.

“In this regard, we call for political parties and their leaders to conduct themselves peacefully. There must be a full investigation of incidences of violence and all those found responsible must be held accountable,” the ERC statement read.

The most notable public violence matter is the alleged attempted assassination of MDC Alliance leader Nelson Chamisa, who has been touring the rural parts of the country which are primarily Zanu-PF strongholds.

In an interview with the state-controlled Herald newspaper, national police spokesperson Assistant Commissioner Paul Nyathi said the MDC Alliance filed a police report about the matter but were not co-operating with investigators.

"These sanctions are illegal and hurt the most vulnerable in our society," the presidency said.
Africa
7 months ago

The report adds that the ZRP accounted for 31% of recorded violations.

“The Zimbabwe Republic Police (ZRP) has topped the list of human rights violations in the past two years, but this September, they handed over the mantle to Zanu-PF, which contributed over 37% of violations compared to the ZRP’s 31%,” reads the report.

A total of 195 human rights violations such as assault, displacement, sexual harassment and unlawful detention were recorded during that period. The report noted that there was also an increase in internal political violence in Zanu-PF.