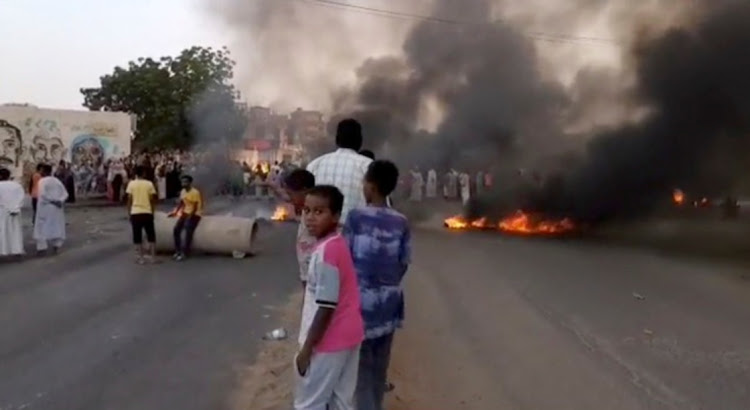 People gather around as smoke and fire are seen on the streets of Kartoum, Sudan, amid reports of a coup, on October 25, 2021, in this still image from video obtained via social media.
Image: RASD SUDAN NETWORK via REUTERS

The Khartoum airport was shut and international flights were suspended on Monday, the Dubai-based al-Arabiya TV channel reported, amid reports of a military coup. There was no announcement from the Sudanese government on the status of the airport.

Sudan decided to halt the entry of vessels carrying fuel into its territorial waters to avoid incurring fines due to delays in offloading, Asharq TV ...
Africa
7 months ago

The majority of Sudan's cabinet members and a large number of pro-government party leaders have been arrested in an apparent coup in the capital Khartoum, a Reuters witness reported on Monday citing political sources.

The Sudanese Professionals Association (SPA) called on Monday for a general strike and civil disobedience in face of a “military coup” following the arrest of prominent members of the country's civilian leadership.”

We urge the masses to go out on the streets and occupy them, close all roads with barricades, stage a general labour strike, and not to co-operate with the putschists and use civil disobedience to confront them,” the group said in a statement.

African governments are using new technology and laws to increase surveillance of opposition figures, researchers warn, calling for restrictions on ...
Africa
7 months ago

Military forces arrested several members of Sudan's civilian leadership before dawn on Monday, Al Hadath TV reported, as a prominent pro-democracy group called on Sudanese to take to the streets to resist any military coup.