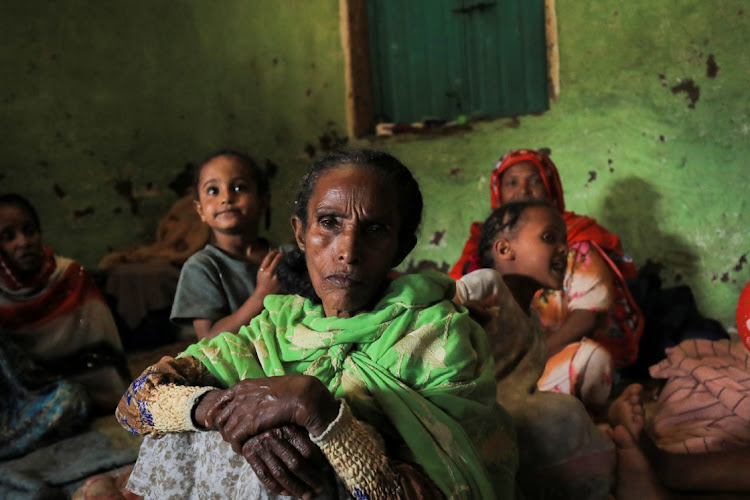 Fatuma Hussein, 65, sits in her shelter with her family at a camp for the internally displaced due to the fighting between the Ethiopian National Defence Force and the Tigray People's Liberation Front forces in Dessie, Ethiopia,
Image: REUTERS/ TIKSA NEGERI

A report on abuses committed during war in Ethiopia's northern Tigray region will be published on Wednesday, but a spokesperson for the party controlling Tigray said investigators did not visit many sites where violence occurred.

The report will be released hours after Ethiopia declared a state of emergency following Tigrayan forces saying they might march on the capital.

The joint investigation by the United Nations Human Rights Office and the state-appointed Ethiopian Human Rights Commission set out to document alleged violations of human rights, humanitarian and refugee law committed by all parties to the conflict in Tigray.

An Ethiopian government air strike on the capital of the northern Tigray region on Friday forced a U.N. aid flight to abort a landing there, the ...
Africa
7 months ago

The government has denied blocking aid and said individual soldiers have been tried for any abuses, without giving details. Eritrea has denied committing abuses. The Tigray People's Liberation Front (TPLF), which controls most of Tigray, has said some “vigilante” Tigrayan groups may have committed abuses but its own formal forces are not responsible.

The war began a year ago after regional forces and Tigrayan soldiers in the national army seized control of military bases across Tigray, claiming the central government was about to move against Tigray after the region held its own elections despite a government directive delaying them.

The conflict has plunged around 400,000 people in Tigray into famine, killed thousands of civilians and forced more than 2.5 million people in northern Ethiopia to flee their homes.

UN human rights chief Michelle Bachelet agreed in March to an Ethiopian request for a joint investigation in Tigray. She said then it was possible war crimes had been committed.

An investigator from the UN's Office of the High Commissioner for Human Rights (OHCHR) was among seven UN officials deported by Ethiopia last month.

TPLF spokesperson Getachew Reda said the investigators had not visited many sites in Tigray where mass killings allegedly occurred.

Sudan's military said on Sunday it had repelled an attempted incursion by Ethiopian forces in the border area between the two countries.
Africa
8 months ago

He said the report would be faulty because of that and because the investigators did not involve all parties to the war.

“They have kept us in the dark,” he said.

It was not immediately clear whether findings from the report could form the basis for legal action. Ethiopia is not a member of the International Criminal Court, so the court has no jurisdiction.