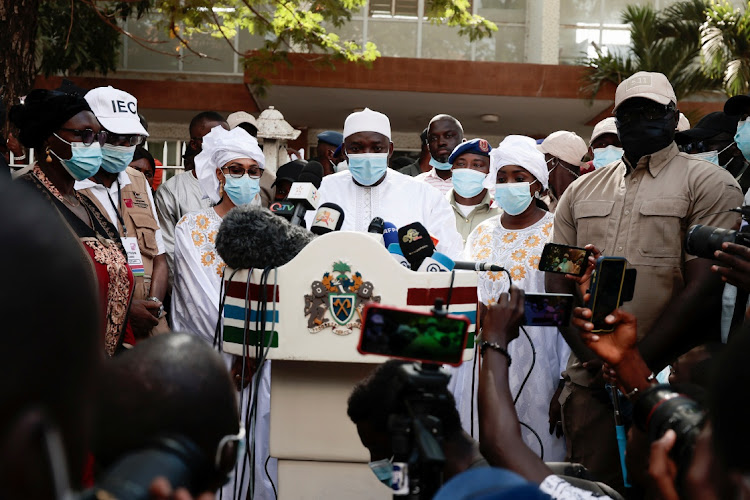 Gambia's President Adama Barrow speaks to the media after voting during the presidential election in Banjul on December 4 2021. Three opposition candidates have rejected early results that show Barrow with a commanding lead.
Image: REUTERS/Zohra Bensemra

Three opposition candidates have rejected the partial results of Gambia's election that show President Adama Barrow with a commanding lead, they said in a statement, citing an unusual delay in tallying the votes.

Earlier on Sunday, Barrow was on course for a resounding election win, partial results indicated, that could help to draw a line under recent political turmoil.

Saturday's vote was the first in 27 years without disgraced former president Yahya Jammeh, who lives in exile in Equatorial Guinea after refusing to accept defeat to Barrow in 2016.

Jammeh, whose 22-year rule over the tiny nation of 2.5-million people was characterised by killings and torture of political opponents, had tried to persuade supporters to vote for an opposition coalition in telephoned speeches that were relayed to campaign rallies. But his lingering influence was not enough to dent Barrow's showing.

Gambian President Adama Barrow had a narrow early lead after Saturday's presidential election, according to provisional results from the first few ...
Africa
1 month ago

The president, who only needs to win more votes than the second-placed candidate, won 36 of the first 41 constituencies announced, taking 315,547 votes.

His nearest rival, political veteran Ousainou Darboe, had 133,177 votes, with four other candidates far behind. Only 12 constituencies remained to be announced.

The election was seen as a test of Gambia's democratic progress and its ability to leave the Jammeh era behind.

Barrow's first term was marked by the coronavirus pandemic, which damaged an economy that relies heavily on tourism, as well as exports of peanuts and fish.