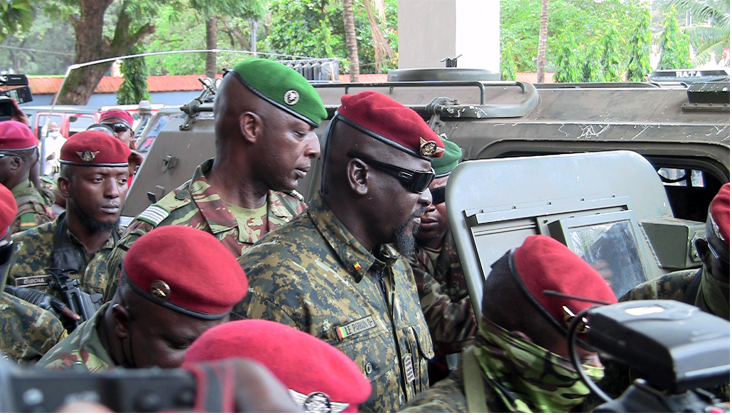 Doumbouya said he would submit the proposal to the National Transitional Council, an 80-member body set up by the junta to act as parliament during the transition to elections.
Image: REUTERS/ Saliou Samb

The military junta in Guinea said its transition back to civilian rule will probably take more than three years, a proposal likely to upset West Africa's political bloc that has called for a swift return to constitutional order.

Colonel Mamady Doumbouya, the head of the junta that took power in a coup last September, told state television on Saturday that after political consultations he was considering a transition of 39 months - the first time he has proposed a timeline.

Military leaders have snatched power in Mali, Burkina Faso and Guinea over the last two years, raising concerns of a backslide in democracy in West Africa that over the past decade had begun to shed its reputation as a “coup belt”.

The coups have put the countries at odds with the Economic Community of West African States (ECOWAS), which is trying to put power back in civilians' hands.

President Cyril Ramaphosa and counterpart President Umaro Sissoco Embaló of Guinea-Bissau have tasked their ministers to delve deeper into various ...
News
3 weeks ago

ECOWAS has already imposed sanctions on Mali after military leaders proposed holding onto power until 2025, hammering its economy by shutting it off from regional trade and financial markets. ECOWAS has given Mali 12-16 months to arrange democratic elections.

When Burkina Faso's leaders proposed a 3-year transition to civilian rule, ECOWAS called for “a more acceptable timeline” but stopped short of imposing sanctions on the impoverished state.

ECOWAS has imposed sanctions on Guinea's junta leaders but not on the wider economy. A spokesperson declined to comment on Sunday.

Doumbouya said he would submit the proposal to the National Transitional Council, an 80-member body set up by the junta to act as parliament during the transition to elections.

The National Front for the Defense of the Constitution (FNDC), a coalition of political parties and civil society organisations, condemned the plan.

“The National Coordination of the FNDC reminds (Doumbouya) that it is inadmissible, inconceivable and unacceptable for the National Transitional Council to endorse this proposal by the junta, which has no legal basis,” it said in a statement.

Doumbouya said that 39 months was the average timeline that emerged from consultations with political parties and civil society groups, which his main opponents boycotted.

It was not clear when the 39 month period would start.