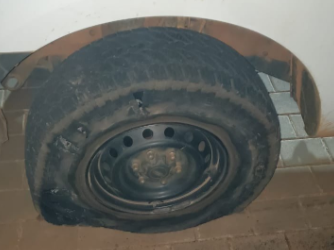 The Zimbabwe Republic Police (ZRP) have banned the use of hand-held spikes by traffic officers to stop vehicles believed to be breaking road regulations.

The two-metre-long iron bars with spikes are used to to deflate vehicle tyres. These have been blamed for causing road accidents .

The ban comes after traffic officers used hand-held spikes to stop a moving minibus that was ferrying passengers, including schoolchildren, resulting in it overturning.  Four people were killed and several others seriously injured.

In a statement, ZRP assistant commissioner Paul Nyathi said police officers who defy the ban will be arrested and face both criminal and stern disciplinary action.

“The commissioner general of police has with immediate effect banned the use of hand-held spikes by any police officers while performing traffic enforcement duties throughout the country.

“Any police officer who will defy this directive will be arrested and face both criminal and stern disciplinary action. No police officer will be allowed to move around while openly holding or carrying spikes under the guise of traffic enforcements,” read the police statement.

Police said they would only use of standard and approved spikes which will be “strategically used at conventional road blocks and checkpoints”.

The use of the spikes has over the years attracted criticism from motorists and civil society who felt there were better ways for policing traffic.

Recently, the Zimbabwe Human Rights NGO Forum demanded ZRP halt the use of hand-held spikes to stop moving vehicles saying it was not only “illegal, but socially undesirable and constitutionally impermissible”.

“The use of spikes amounts to excessive use of force and violates the right to personal security as provided for in section 52 of the constitution.

“This conduct is socially undesirable and constitutionally impermissible. It also unlawful and a criminal offence in terms of section 38 of the Criminal Law (codification and reform) Act (chapter 9:23) and section 60 of the Road Traffic Act (chapter 13:11),” said the civil society group.