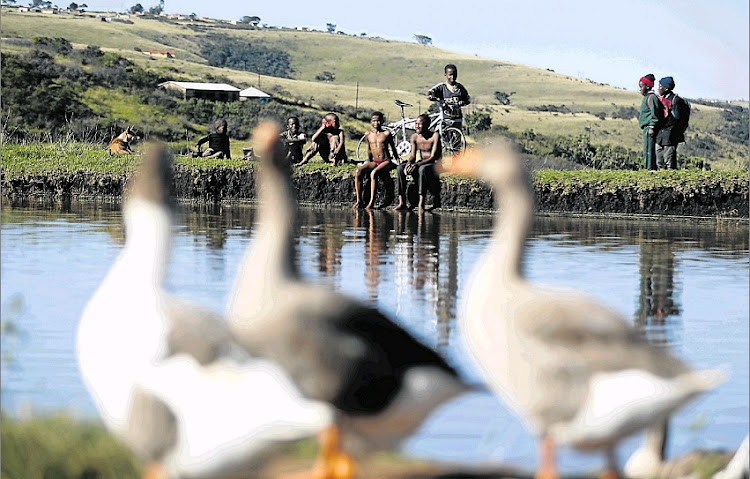 Boys from Nqandani near Butterworth relax at the Ntabalenga Dam while geese walk by.
Image: Michael Pinyana

The “new dawn” change of guard in the country has swept away the obstacles stymieing the Mzimvubu Water Project which has been in the pipeline for more than 50 years.

It is envisaged that construction of this project in the former Transkei homeland will begin in January. The new minister of water and sanitation, Gugile Nkwinti, has reprioritised the Mzimvubu Water Project and has budgeted for this life-changing project.

The initiative had been on hold since the 1960s due to commercial and political reasons. The area surrounding the planned water project is characterised by grinding poverty among local communities.

It is well-known that the former homelands were not developed by previous governments, including the colonial and the apartheid governments. When the Natives Land Act was passed in 1913, the black indigenous people had their material possessions, including land, livestock and culture taken from them and were subsequently dumped in the 7% of land mass called “bantu reserves”, which later graduated into ethnic-based bantustans.

The underdeveloped bantustans (or homelands if you like) became reservoirs of cheap labour for the white mines and white farms.Building the Mzimvubu Water Project in the heart of Transkei, would have countered the apartheid strategy of subjudication and impoverishment of the locals, and creation of sufficient cheap labour for apartheid business ventures.

The ANC wants the Bhisho government to prioritise several multibillion-rand development projects this year, which will see thousands of jobs created ...
News
4 years ago

Nkwinti’s philosophy is that government infrastructure projects should drive the economic development of an area.The reason for the construction of such projects should be based on their ability to socially and economically uplift the communities around them.

The Mzimvubu Water Project previously was held back by the same considerations that saw small towns in the Little Karoo die when their economies collapsed after the apartheid government refused in 1960, because of costs, to provide water canals from the Gariep Dam of the Orange River to towns in that mohair-producing enclave.

The then government ignored the social and economic well-being of the people of these areas, and instead got fixated on the costs and commercial viability of these projects.The new policy of the water and sanitation department is that state infrastructure projects should be the drivers of the local economy in order to empower the communities and lift them out of poverty.

The Mzimvubu Water Project had, at one stage, been considered a potential social amenity project that would serve as an entertainment resort, hence it was held back. The then powers-that-be overlooked the locals who were in dire straits.It is a stroke of luck that the new water and sanitation minister had, while he was a provincial minister of local government and housing in his Eastern Cape province, witnessed the deprivation of the Pondoland area where the Mzimvubu Water Project will be built.

Nkwinti had chaired the Presidential Infrastructure Co-ordinating Committee (PICC) and was at one stage also MEC for agriculture, which meant he understood the gravity of water stressed small-scale farmers whose families depended on peasant farming for their livelihood.Nkwinti said last weekend that the Trans Caledon Tunnel Authority (TCTA) of the department of water and sanitation will be appointed project managers to manage the Mzimvubu Water Project construction.

The primary objective of the Mzimvubu Water Project is socioeconomic development in the Mzimvubu catchment, one of the poorest regions in SA.The project is a multi-purpose conjunctive scheme that entails staged construction over a number of years. Certain components are ready for implementation.

It is envisaged that the project will generate multiple benefits which will impact positively on the local communities.

The Ntabelanga dam will supply potable water to 539,100 people in the Joe Gqabi, O R Tambo and Alfred Nzo districts.

The project will also benefit 2,868ha of high-potential land suitable for irrigated agriculture. Of this, 2,450ha are situated in the Tsolo area. The Lalini Dam hydropower plant could generate 23Mw of base-load hydropower and about 600 jobs stand to be created during the catchment rehabilitation.

The Mzimvubu Water Project also falls within the mining labour supply areas which form part of the Special Presidential Project on the Revitalisation of Distressed Mining Towns. The department of water and sanitation has thus joined other key roleplayers to unlock development in the Mzimvubu region and surrounding areas, using this project as a nucleus for a much broader economic development framework.

This framework includes the proposed Wild Coast Spatial Economic Development Zone, recreation and associated tourism activities and the development of road infrastructure to open the region to the anticipated increased economic activity.

Construction of the Mzimvubu Water Project could commence in January 2019 and be completed by September that year if there are no unforeseen delays.l Mtobeli Mxotwa is a director and a spokesperson for the Ministry of Water and Sanitation.