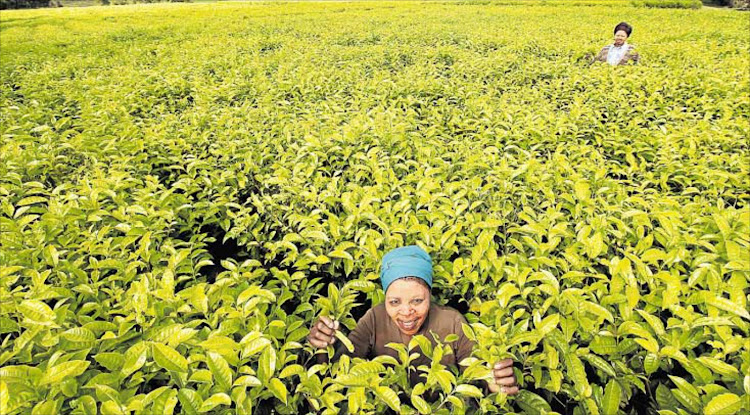 A farmer at work at the the Magwa tea estate. Magwa and Majola tea estates, into which the government has ploughed R100m of taxpayers’ money over almost three years, faces provisional liquidation.
Image: File

The Eastern Cape government is working on a plan that could eventually see the government owned Magwa Tea distributed into the mainstream market.

The tea is only available from the regional offices of the department of rural development and agrarian reform and a select few retailers in the Port St Johns and Lusikisiki area.

In June, however, premier Oscar Mabuyane announced that Magwa would be procured by all state departments in the province, including municipalities.

He said this was necessary because the government had pumped a lot of money into reviving the estate, which is based in the Lusikisiki area.

Provincial rural development and agrarian reform department spokesperson Ayongezwa Lungisa said the tea was not yet available in retail shops but only at their offices, and a few private distributors sold it in some towns.

The provincial government will not allow the Magwa and Majola Tea estates to be liquidated, says acting head of the rural development and agrarian ...
News
3 years ago

“Magwa management and ECDRA [Eastern Cape Rural Development Agency] have developed a marketing and distribution strategy to guide its sales and broaden the product sales footprint across all sectors of the market inside and outside the province,” Lungisa said.

The Majola tea estate, near Port St Johns, was incorporated into the Magwa estate, which was placed under business rescue in 2015.

The merged plantations are known as Magwa Tea Estate.

The company is wholly owned by the state via its shareholder, the Eastern Cape Rural Development Agency.

The government has pumped more than R100m into the business rescue process over the past three years.

Meanwhile, Majola tea is sold as loose tea but only in Port St Johns, Tombo and surrounding villages.

“Procurement of a teabagging machine for Majola is currently under way to make it available to a broader teadrinking audience.

“Though the traditional market for Majola tea is in loose form, we believe teabags will allow the tea to reach markets outside these areas and help the Majola brand become more easily recognisable in the broader scheme of things,” Lungisa said.

While delivering his state of the province address, Mabuyane said tea factories needed to be refurbished.

Hundreds of tons of tea are finally being produced by Magwa and Majola tea estates.more Rural development and agrarian reform MEC Mlibo Qoboshiyane ...
News
4 years ago

In her maiden policy speech, rural development and agrarian reform MEC Nomakhosazana Meth said the government had allocated R33m to the estates to cover operations, including salaries, wages and the procurement of teabagging equipment.

Meth said the department was working on a plan to include a tourism aspect around the Magwa-Majola estates with the Lambasi valley to create a hub of economic activity.

She said they would do so by developing the valley into a buzzing ecotourism enclave.

“The province is currently busy with the completion of the Magwa-Majola tea estate master plan.

“The plan and a futuristic 3D model for the Magwa-Majola tea and ecotourism valley will be unveiled at a rural development indaba and investment conference that the province is planning for October 2019,” Meth said.