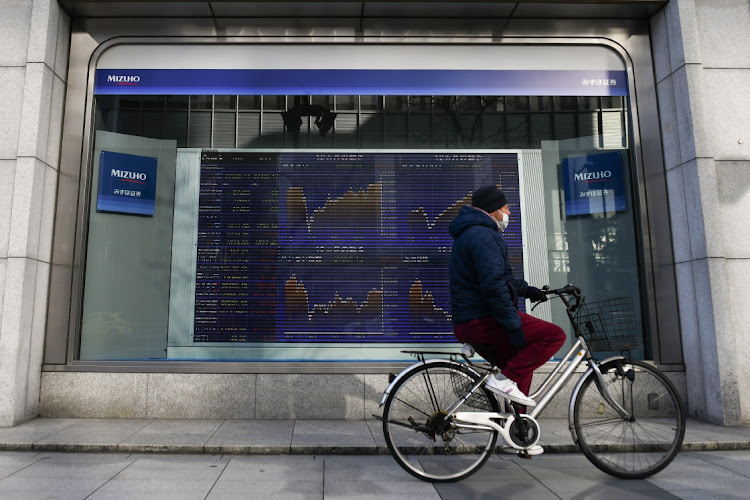 A cyclist wearing protective masks travels past an electronic stock board outside a securities firm in Tokyo on January 4 2021.
Image: NORIKO HAYASHI

Stocks took a breather on Tuesday, easing from record highs as political turmoil in Washington and rising coronavirus cases gave pause, though a sell-off in US Treasuries extended as investors reckon on a big-spending government.

The yield on benchmark US government 10-year debt, which rises when prices fall, gained as much as 2.4 basis points to a fresh 10-month high of 1.1580%.

MSCI’s broadest index of Asia-Pacific shares outside Japan fell 0.3% after touching a high on Monday, led by a 1.6% drop in South Korea as investors took some profit from a soaring Kospi.

Drugmakers lifted Japan’s Nikkei to a fresh three-decade high after reports of another effective Covid-19 treatment, though the index eased to flat by lunchtime.

We’ve seen a very strong week or so (in equities) and I think the lower moves we are seeing are a bit of profit-taking. I don’t think higher interest rates or inflation expectations are being an area of concern for equities at the moment

A resurgent US dollar clung to four days of gains against other currencies, holding the euro and yen close to multi-week lows.

“We’ve seen a very strong week or so (in equities) and I think the lower moves we are seeing are a bit of profit-taking,” said Chad Padowitz, chief investment officer at Talaria Capital in Melbourne. “I don’t think higher interest rates or inflation expectations are being an area of concern for equities at the moment.”

Political uncertainty tempered the mood somewhat as Democrats introduced a resolution to impeach US President Donald Trump, accusing him of inciting insurrection after a violent attack on the Capitol last week.

Overnight, the Nasdaq led modest losses on Wall Street, falling 1.3% as investors sold tech giants who have taken actions against Trump and his supporters.

The US yield curve is steepening because investors expect a big-spending, big-borrowing US government after Democrats last week won control of both houses of Congress.

Does a weak economy automatically translate into a weak currency?

A weak economy does not always result in a weak currency. GDP (GDP) is the most pertinent measure to consider when measuring an economy’s relative ...
Business
6 months ago

The yield on US 10-year debt is up 23 basis points already this year and the spread between the two-year and 10-year Treasury yields is now wider than 100 basis points for the first time since July 2017.

Flows from the huge and sudden sell-off have supported equities while tapping the brakes on short dollar positions. Renewed focus on inflation expectations will have investors closely watching US consumer price index data due on Wednesday.

“We shift towards being net neutral on the dollar for now, pending how Treasury yields evolve in the coming sessions,” said OCBC Bank strategist Terence Wu in a note to clients.

“Our bias is for the 10-year yield to experience some pullback. We will more concerned should the 10-year yield breach 1.25%-1.30% levels, and be on a clear path towards 1.60%. That may be the signal for a more sustained dollar strengthening.”

The Reserve Bank acted quickly and aggressively to support households and firms through the worst of the pandemic and lockdown, Bank governor Lesetja ...
Business
7 months ago

Elsewhere, investors are expecting guidance on the extent to which executives see a rebound in 2021 earnings and the economy from results and conference calls from JPMorgan, Citi and Wells Fargo on Friday.

Gold which has been sold as US yields rise because it pays no interest, steadied at $1,850 an ounce.