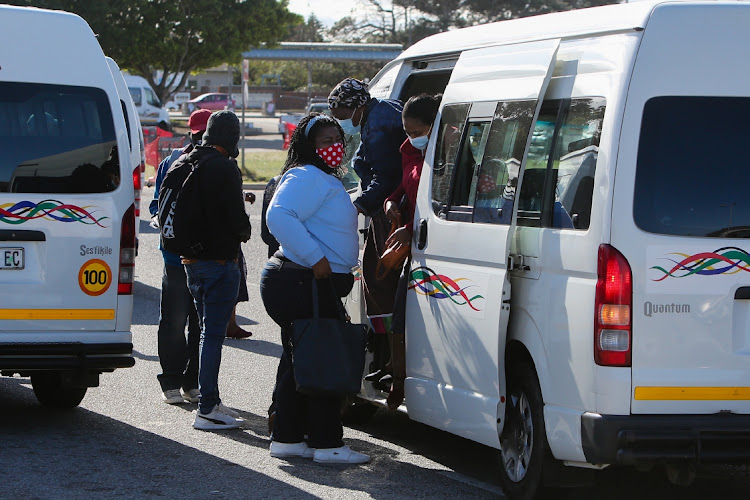 A taxi driver fills up his taxi with passengers at the Greenacres Taxi rank.
Image: WERNER HILLS

From a women-only driving school to an all-female taxi service — an SA activist-turned-entrepreneur is tackling high rates of sexual assault by providing safe transport in one of the country’s most crime-ridden areas.

The Cape Flats, which lies on the outskirts of Cape Town, is notorious for gang warfare, and sexual violence is an everyday fear for women taking taxis or using public transport in the area, said Joanie Fredericks.

Launched last week, Fredericks said her taxi service, Ladies Own Transport, had already received calls from women requesting a ride to work that will keep them safe, with some saying they were “smitten” with the idea.

“I’ve heard too many stories of women being raped in taxis,” Fredericks, who has been a community activist in the Cape Flats for two decades, said.

A taxi driver in Nelson Mandela Bay has been found guilty of raping his 14-year-old passenger in front of her two younger siblings. Mongameli Jojo, ...
News
6 months ago

“I always knew I wanted to do something about it, but a few weeks ago I heard someone I know personally has been raped and I thought I can’t wait a minute longer,” she said.

In the year ending March 2020, more than 53,000 sexual assaults were reported in South Africa, according to police figures, though women’s rights groups say the true number is likely far higher.

Research shows that in sub-Saharan Africa “transport poverty” — inaccessible or unsuitable transport that negatively affects a person’s quality of life — disproportionately affects women and girls due to sexual harassment and abuse.

And according to a 2019 index by the Georgetown Institute for Women, Peace and Security that measured safety in 167 countries, only about 25% of SA women feel safe walking at night.

Fredericks said the fear of crime was ever-present for women in the Cape Flats, where the apartheid-era government dumped black and coloured people forced out of white-only areas.

Cape Town authorities could not immediately be reached for comment.

Ladies Own Transport is an add-on company to the women’s driving school that Fredericks launched in 2018, which has taught hundreds of women to drive.

When Fredericks launched the driving school, more than 500 women signed up on the first day.

It became a kind of counselling service too, she said.

“Do you know how many times we had to switch off the car, and just sit and talk. This is often the only space women have to get away from abusive relationships,” she said.

Customers told her male driving instructors often tried to “chat them up”.

“A car is an intimate space, all she wants is to be taught how to drive and here she has to fend off hands and advances from men once more,” she said.

Tamara Goliath got her driving licence through Ladies Own Transport just before lockdown in March 2020 and just before giving birth.

A 37-year-old taxi driver was arrested on Thursday and charged with rape. This was after he was pulled over in John Tallant Drive, Deal Party, for ...
News
11 months ago

“I felt safe and comfortable with my female instructor,” said Goliath, a former teacher.

“There wasn’t that … harassment that sometimes comes with male instructors,” said Goliath, adding that women always have to consider their safety when using public transport too.

“It is quite profound, the way Joanie has gone out of her way to empower women around her,” she said.

Fredericks, who has also been running a feeding scheme for more than 10,000 people since lockdown began in 2020, hopes to expand her taxi service from her neighbourhood of Tafelsig across the Cape Flats.

“I’m not going to stop until Tafelsig is a place where anybody feels they can come any time to visit without fear of being robbed, raped or killed. And I think I’m getting there,” she said.