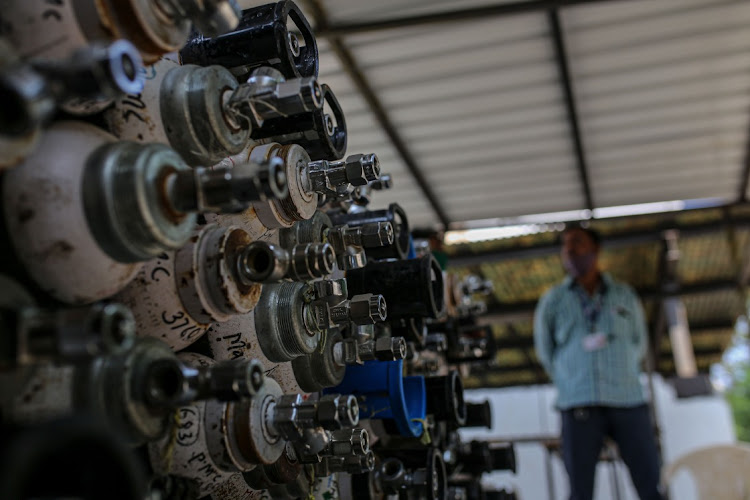 Empty oxygen cylinders are stacked in a facility at Naidu Hospital in Pune, Maharashtra, India, May 6 2021. Picture: DHIRAJ SINGH/BLOOMBERG

The US-German company, which supplies gases such as oxygen, nitrogen and hydrogen to factories and hospitals, now expects adjusted earnings per share to rise 17%-19% year on year,  compared with its previous forecast for 11%-13% growth.

Higher prices and growing demand in the healthcare sector — where Linde supplies equipment and medical gases including oxygen for Covid-19 patients — helped its sales in Europe, the Middle East and Africa jump 10% in the first quarter.

EC avoids using donated machines that consume ‘too much oxygen’

Just three weeks ago, the Eastern Cape health department heralded the donation of 900 oxygen machines by Gift of the Givers. Now hospitals are ...
News
1 year ago

The pandemic has driven up demand for medical oxygen, particularly in India, where severe shortages and logistics problems have seen dozens of hospitals run short in recent weeks.

Linde, India's biggest oxygen producer, and other suppliers are ramping up production to more than 9,000 tonnes per day by mid-May, an executive told Reuters last week.

Lamba noted similar challenges in Mexico, Brazil and other Latin American countries — where infections continue to spread, filling up intensive care units, even as restrictions ease.

Linde's overall earnings per share for January-March rose 32% to $2.49, beating analysts' average estimate of $2.26 and its own guidance.