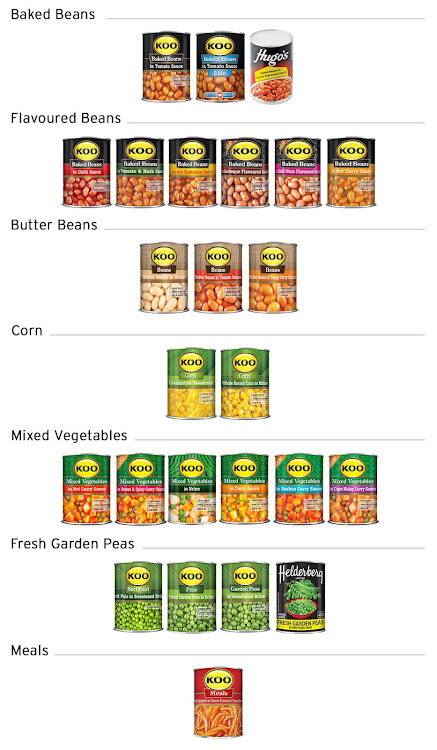 Tiger Brands has withdrawn 20-million canned vegetable products following a leak in a few of the cans.
Image: Koo

Tiger Brands announced on Monday that it has withdrawn 20-million of its canned vegetable products because of a leak in a small number of its cans.

It said the financial impact of the recall, including the cost of the potentially affected stock that may be written off, transport and storage costs, as well as the loss of margin on the returned stock, is estimated at between R500m and R650m.

Tiger Brands said a leak in a can presented a risk of secondary microbial contamination after the canned products are dispatched into the marketplace.

“Where such contamination occurs, it will present a low probability of illness and injury if the contaminated product is consumed.

“Notwithstanding that only two side seam leaks had been detected as a result of the transport test, with consumer safety as an absolute priority, Tiger Brands considers it appropriate that it institutes an immediate recall of all products that could potentially be affected.”

Tiger Brands said this involves the withdrawal of specific canned vegetable products manufactured under the KOO and Hugo's brands between May 1 2019 and May 5 2021, amounting to about 20-million cans, which is about 9% of annual production.

KZN accounts for the bulk of the more than R150m in stock losses SA’s largest food producer has suffered as the result of widespread looting.
News
11 months ago

Tiger Brands says the withdrawal followed a disclosure by the company to shareholders on May 21, of defective packaging materials identified at one of the company's sites.

The company said this related specifically to 18 leaking food cans which had been identified by Tiger Brands' groceries division during May 2021, as part of its internal quality assurance processes.

“These defective cans were identified before the final labelling of the finished products and were traced back to three different batches of cans which had been purchased from one of the division's key packaging suppliers.

“This incident was immediately reported to the packaging supplier.”

Tiger Brands said shortly after reporting this incident to the packaging supplier, it was notified by the supplier that a further three batches of cans could have presented the same defect, which was a deficient side seam weld that could cause the cans to leak.

“The six defective batches referred to above were the subject of the disclosure made by the company on May 20 2021.

“It is important to note that all the affected finished products manufactured, using these six defective batches of cans, were never released to the trade and were placed in quarantine for further investigation, with the knowledge and agreement of the packaging supplier.”

Tiger Brands said despite it having found no evidence of any leaking cans with consumers, and with the agreement of the packaging supplier, it immediately initiated a rigorous transport and handling test.

Residents in parts of Soweto and Kagiso on the West Rand have reported there is no bread at shops still able to trade.
News
11 months ago

This entailed transporting both labelled and unlabelled product from its warehouses in Johannesburg to its facilities in the Western Cape.

The purpose was to assess whether the leaks could manifest after the finished product had passed through Tiger Brands' quality assurance processes and left Tiger Brands'´ custody.

“Out of 287,040 cans inspected after the transport and handling test, a side seam leak had developed in two cans.

A full list of the potentially affected products can be found here.

Tiger Brands said the recall is expected to be concluded in about 120 days.

Sweet story of Mrs Balls and her world-famous chutney

It’s as much a part of SA food heritage as rooibos tea, biltong and pap — but who would have said the world famous Mrs Ball’s chutney is named after ...
Lifestyle
1 year ago