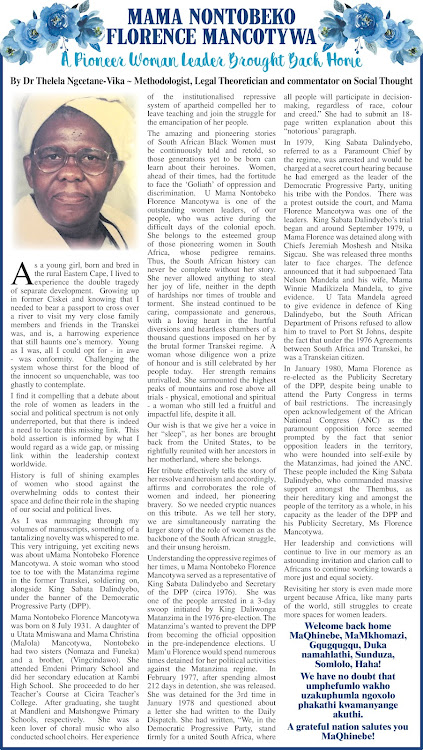 As a young girl, born and bred in the rural Eastern Cape, I lived to experience the double tragedy of separate development. Growing up in former Ciskei and knowing that I needed to bear a passport to cross over a river to visit my very close family members and friends in the Transkei was, and is, a harrowing experience that still haunts one’s memory. Young as I was, all I could opt for - in awe- was conformity. Challenging the system whose thirst for the blood of the innocent so unquenchable, was too ghastly to contemplate.

I find it compelling that a debate about the role of women as leaders in the social and political spectrum is not only underreported, but that there is indeed a need to locate this missing link. This bold assertion is informed by what I would regard as a wide gap, or missing link within the leadership context worldwide.

History is full of shining examples of women who stood against the overwhelming odds to contest their space and define their role in the shaping of our social and political lives. As I was rummaging through my volumes of manuscripts, something of a tantalizing novelty was whispered to me. This very intriguing, yet exciting news was about uMama Nontobeko Florence Mancotywa. A stoic woman who stood toe to toe with the Matanzima regime in the former Transkei, soldiering on, alongside King Sabata Dalindyebo, under the banner of the Democratic Progressive Party (DPP).

Mama Nontobeko Florence Mancotywa was born on 8 July 1931. A daughter of Utata Mmiswana and Mama Christina(MaJola) Mancotywa, Nontobeko had two sisters (Nomaza and Funeka)and a brother, (Vingcindawo). She attended Emdeni Primary School and did her secondary education at Kambi High School. She proceeded to do her Teacher’s Course at Cicira Teacher’s College. After graduating, she taught at Mandleni and Matshongwe Primary Schools, respectively. She was a keen lover of choral music who also conducted school choirs. Her experience of the institutionalised repressive system of apartheid compelled her to leave teaching and join the struggle for the emancipation of her people.

The amazing and pioneering stories of South African Black Women must be continuously told and retold, so those generations yet to be born can learn about their heroines. Women, ahead of their times, had the fortitude to face the ‘Goliath’ of oppression and discrimination. U Mama Nontobeko Florence Mancotywa is one of the outstanding women leaders, of our people, who was active during the difficult days of the colonial epoch. She belongs to the esteemed group of those pioneering women in South Africa, whose pedigree remains.

Thus, the South African history can never be complete without her story. She never allowed anything to steal her joy of life, neither in the depth of hardships nor times of trouble and torment. She instead continued to be caring, compassionate and generous, with a loving heart in the hurtful diversions and heartless chambers of a thousand questions imposed on her by the brutal former Transkei regime. A woman whose diligence won a prize of honour and is still celebrated by her people today. Her strength remains unrivalled. She surmounted the highest peaks of mountains and rose above all trials - physical, emotional and spiritual- a woman who still led a fruitful and impactful life, despite it all.

Our wish is that we give her a voice in her “sleep”, as her bones are brought back from the United States, to be rightfully reunited with her ancestors in her motherland, where she belongs. Her tribute effectively tells the story of her resolve and heroism and accordingly, affirms and corroborates the role of women and indeed, her pioneering bravery. So we needed cryptic nuances on this tribute. As we tell her story, we are simultaneously narrating the larger story of the role of women as the backbone of the South African struggle, and their unsung heroism.

Understanding the oppressive regimes of her times, u Mama Nontobeko Florence Mancotywa served as a representative of King Sabata Dalindyebo and Secretary of the DPP (circa 1976). She was one of the people arrested in a 3-dayswoop initiated by King Daliwonga Matanzima in the 1976 pre-election. The Matanzima’s wanted to prevent the DPP from becoming the official opposition in the pre-independence elections. U Mam’u Florence would spend numerous times detained for her political activities against the Matanzima regime. In February 1977, after spending almost212 days in detention, she was released. She was detained for the 3rd time in January 1978 and questioned about a letter she had written to the Daily Dispatch. She had written, “We, in the Democratic Progressive Party, stand firmly for a united South Africa, where all people will participate in decisionmaking, regardless of race, colour and creed.” She had to submit an 18-page written explanation about this “notorious" paragraph.

In 1979, King Sabata Dalindyebo, referred to as a Paramount Chief by the regime, was arrested and would be charged at a secret court hearing because he had emerged as the leader of the Democratic Progressive Party, uniting his tribe with the Pondos. There was a protest outside the court, and Mama Florence Mancotywa was one of the leaders. King Sabata Dalindyebo’s trial began and around September 1979, uMama Florence was detained along with Chiefs Jeremiah Moshesh and Ntsika Sigcau. She was released three months later to face charges. The defence announced that it had subpoenaed Tata Nelson Mandela and his wife, Mama Winnie Madikizela Mandela, to give evidence. U Tata Mandela agreed to give evidence in defence of King Dalindyebo, but the South African Department of Prisons refused to allow him to travel to Port St Johns, despite the fact that under the 1976 Agreements between South Africa and Transkei, he was a Transkei an citizen.

In January 1980, Mama Florence as re-elected as the Publicity Secretary of the DPP, despite being unable to attend the Party Congress in terms of bail restrictions. The increasingly open acknowledgement of the African National Congress (ANC) as the paramount opposition force seemed prompted by the fact that senior opposition leaders in the territory, who were hounded into self-exile by the Matanzimas, had joined the ANC. These people included the King Sabata Dalindyebo, who commanded massive support amongst the Thembus, as their hereditary king and amongst the people of the territory as a whole, in his capacity as the leader of the DPP and his Publicity Secretary, Ms Florence Mancotywa.

Her leadership and convictions will continue to live in our memory as an astounding invitation and clarion call to Africans to continue working towards amore just and equal society.

Revisiting her story is even made more urgent because Africa, like many parts of the world, still struggles to create more spaces for women leaders.

A grateful nation salutes you MaQhinebe!