Spreading awareness through art, and a hospital bed 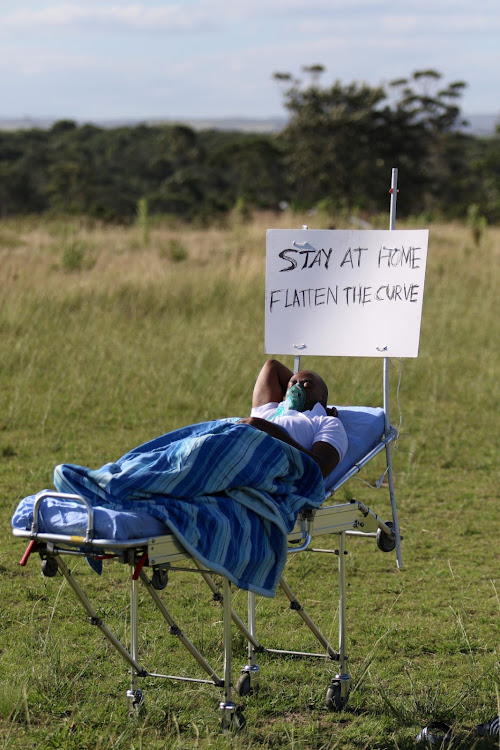 This is what fine art practitioner Sonwabiso Ngcai said he aimed to achieve with his latest visual performance piece centred on awareness around Covid-19.

The Nelson Mandela University art, design and music lecturer recently arrived in a hospital bed at an open space in Beacon Bay with a sign that read “Stay At Home”.

Ngcai said the performance piece titled We Could Be Here, which was done before the lockdown period, was a call for people to adhere to the government’s new regulations in response to the coronavirus outbreak.

He said SA should take lessons from developed countries like Italy which had been faced with huge medical shortages as a result of an exponential growth of Covid-19 infections.

Now is the time for us to come together and unite, apart
News
1 year ago

“Let's learn from that. Italy’s death count as a result of coronavirus overwhelmed state morgues, forcing the country to use other spaces to store corpses,” Ngcai said.

“The title of the performance piece is a representation of what SA’s reality could be if we choose not to comply with government’s Covid-19 regulations. It’s a grim scene out there.”

He said the “audience” reaction — pedestrians and motorists passing by — was mixed.

Some motorists hooted and cheered in agreement. Some drove past with a puzzled reaction, some pedestrians seemed shocked, doubtful and uncomfortable.

“Some motorists hooted and cheered in agreement. Some drove past with a puzzled reaction, some pedestrians seemed shocked, doubtful and uncomfortable.

“The performance was discomforting in appearance which explains the range of responses and emotions.”.

Ngcai, who has completed his master’s degree in fine art and specialises in ceramic sculptural installations, said he motivated his students to create thought-provoking work that could spark dialogue.

WATCH | Don’t be a victim of Covid-19, leaders sing to Africa

Past and present African heads of state have joined together with Nobel prize laureates and musicians from across the continent to share a message of ...
News
1 year ago

“It’s important to engage the viewer in the space. Art goes beyond the material and aesthetics of a piece. It’s the material which is the basis of where meaning can be found. Art is a valuable medium of communication and relaying messages to society,” he said.

He said that his interest was particularly in 3D artwork, which was “an effective medium of interpretation”.

Ngcai was raised in Buntingville, a village near Ngqeleni in Mthatha, and said it was in 1997 when his heart collided with art.

It’s important to engage the viewer in the space. Art goes beyond the material and aesthetics of a piece.

To add to his artistic career Ngcai has worked as an art lecturer in various institutions such as Vaal University of Technology, Tshepana Primary, Lovedale TVET College and Walter Sisulu University.

Last year, he was selected as the PPC Imaginarium  overall winner. The awards give emerging artists the scope to showcase their talent and creative saying by using cement as their primary medium.

This year Ngcai received the MEC’s Special Award in Visual Art during the Eastern Cape Cultural Awards function, hosted by the department of sport, recreation, arts and culture.

The latest facts, news, figures and live tracking of Covid-19.
News
1 year ago
Next Article