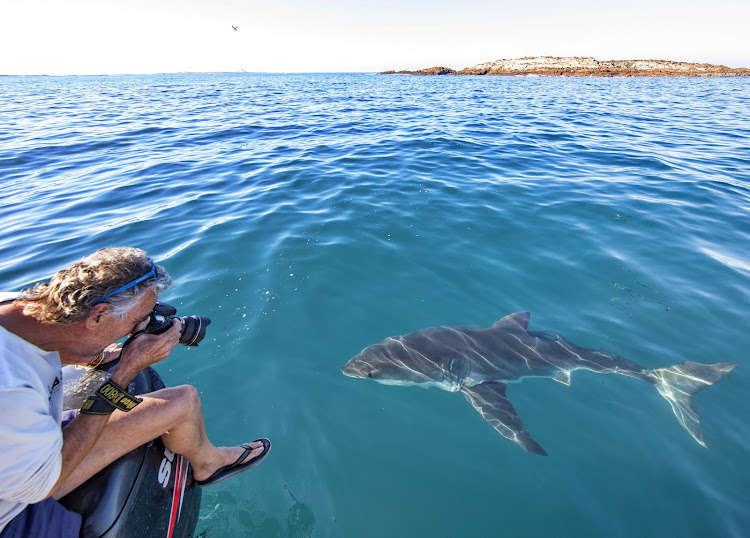 Raggy Charters has launched white shark viewing excursions off Bird Island as a precursor to its planned cage-diving operation.

The company’s owner, Lloyd Edwards, said his team was excited about the healthy numbers of white sharks they had sighted in the area — including one of almost 4m.

However, they had decided to take more time to study the animals, thereby adding value to the cage operation when they did launch it.

Edwards said they had hosted Southern Cape white shark experts Chris and Monique Fallows on two recent visits to the island and were fascinated by how much they learnt about the predators just by viewing them from the surface.

“We’re learning how to identify them by their individual markings and scars and how different actions are preceded by very different behaviour.

“Although they are aggressive and dangerous predators, it was amazing to see how shy and gentle they can be,” Edwards said.

“It totally nullifies the image of them being these ferocious killers that charge up to people and rip them to pieces.

“It took them a great deal of time before they would approach the boat closely.

“I think it’s going to be a vital part of looking after our shark populations going forward.”

To operate at Bird Island, which lies within the Addo Marine Protected Area, Raggy Charters had to present an environmental management plan.

When the plan was approved, and having received the initial right about three years ago, the company finally received its operations permit in December, Edwards said.

“We’ve come a long way and want to go the extra mile to establish something unique in South Africa and possibly the world.

“So we’re adopting a precautionary approach with no shark cage diving yet, only viewing from topside.

“We’re steering away from ‘adrenaline junkie’ experiences and our tours will be conducted in a calm and gentle manner with the wellbeing of the shark our primary consideration.

“Some of the funds generated from our cruises will be used to protect these creatures and their prey.”

Edwards said the sharp decline in white sharks in False Bay, one of their traditional strongholds, compared to the seemingly healthy population in Algoa Bay could be partly linked to the effect of demersal shark long line fishing in Western Cape waters and its prohibition in the Addo MPA.

Demersal shark long line permits are being reviewed by the environment and fisheries department.

But at present, with no attached bag or size conditions, their operations target an array of small sharks such as smooth hound sharks for export to Australia to feed its “flake and chips” market.

These small sharks feature prominently on the menu of white sharks.

A study has shown that there are only about 500 of these apex predators left along the South African coast  — probably due in part to the decline of their prey species.

Edwards said the team had counted nine sharks on its last visit to Bird Island.

Algoa Bay has long had a reputation of being a breeding place for white sharks and juveniles are quite common, especially in the summer months when they prey on blue stingrays

“Algoa Bay has long had a reputation of being a breeding place for white sharks and juveniles are quite common, especially in the summer months when they prey on blue stingrays.

“We saw some of these juveniles at Bird Island but also some big mature adults, including one of almost 4m.”

Raggy Charters has been joined by a University of Cape Town sound engineering student who will be helping the team to identify alternative ways to attract the sharks closer to the boat and, later, the cages.

In line with a call from the Bay conservation sector, Edwards has sought to move away from chumming.

Inspired by a successful Australian operation that uses heavy metal music to attract sharks, he announced in March that the music of late mbaqanga star Johnny Clegg would be used to woo the sharks of Bird Island.

Clegg’s family pulled the plug on the idea, however, arguing that Clegg would not have liked his music used in this way because he would have considered it to be unnatural interference with wildlife.

Edwards said on Monday he wished Clegg was around to reconsider this position.

“I feel he would have understood what we are trying to do.

“But instead we are looking at various other music and sound alternatives.”