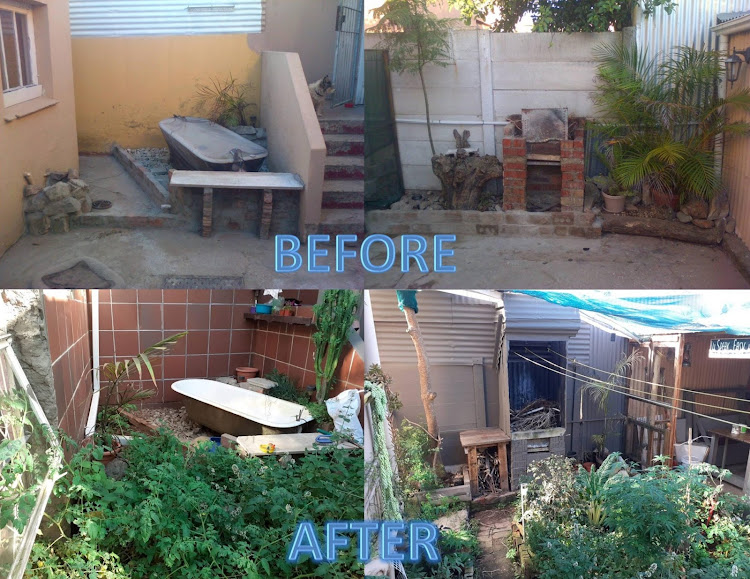 GARDEN PROJECT: The back yard as it looked, with some very basic building work, above, and the end result, with every bit of space used, below
Image: supplied

A back garden might seem like an odd DIY project to some, but it really isn’t all that complicated.

All you need is a little ingenuity, not much money — and bucketloads of patience.

Nowadays, our former cement garden is a place where we can relax and forget about the outside world with its Covid and political drama and crime, and enjoy a bit of nature.

There are lizards and geckos, bugs of all kinds — even those cute jumping spiders.

We even grew our first mielie plant the other day.

This then, is how we transformed our bare cement backyard into a little garden paradise.

About six years ago I set off on this journey. Many years ago my mother had suggested something like this, and I’d filed it away for future use.

Some time after her death, while thinking about stuff — as one does while working through these things, the idea re-emerged and I began to consider actually doing it, and how it might be done.

I decided that if anything worthwhile were to grow there, it would require a layer of earth on top of the cement, about a foot thick.

Drainage would not be much of a concern in this case, as the cement was old and had a lot of cracks in it, and there was a drain at the lowest point which would still work — if I raised the sides of it to match the earth so water would drain off from the sides.

Of course, I had to do some preparation first.

I had a lot of plans in my head after my mother passed away, and the back end of the house — then consisting of an outside toilet and the original outside bathroom of the house, and a small garden shed, lay at the centre of these.

During 2014-15, I had a little building work done to enclose the outside toilet into the outside bathroom, and made a doorway between them and created a shower.

The cast-iron bath moved outside to be a “chill pool” in what would later become my garden.

I had a little low wall with a bench on top of it built beside the bath, and another low wall alongside the old brick braai I’d built many years ago when I was 19 (which still has not fallen down).

I also collected some large white rocks to build retaining walls on top of the bathroom drains to keep the soil out of them.

It made the boring old cement drains look more attractive.

Then I was about ready to bring in the earth.

There are a few places in Gqeberha that sell various types of soil or sand by the bag, and at first I went with the cheapest — soil that had been mixed with horse manure, which cost me about R10 a bag, but which I could at least transport in the back of my car without needing to hire a bakkie.

It took numerous trips and several days when I had time, and that is the best part of it — you do not have to do it all at once.

I would carry two bags through from the car to the back garden at a time, and empty them out from the furthest end of the garden, levelling everything out afterwards with a garden fork, rake and spade.

The nice thing about that system was that the place I got the soil from would give me R1 credit for the return of each bag, so for every 10 bags, I would get one bag of soil free.

It is really up to you what sort of plants you want in your garden.

As for us, we wanted useful plants — things we could use for medicine as well as food.

What limited our choices here was space.

As you can see from the photos, we have a small back yard, so we had to make the most of the space we have.

There is a lot growing in there — all useful plants, no useless flowers — and you are right — bush soil containing horse manure is not going to do all that.

That is where the patience came in.

It took at least two years of adding compost and the occasional bags of “triple mix” to spice up the soil enough for it to be this fertile.

We also grow a lot of our bigger plants in pots.

A UV LED light for those cold winter nights helps keep the plants alive through the chilly season, and does not use much power.

At first, I used a few thick tiles and stepping stones to traverse the soil, which got muddy when it got wet.

Aside from weeds at first — and clover, lots of clover — not much would grow in it.

After a while, I’d amassed enough loose bricks I’d collected for the purpose to lay a pathway through the garden and to raise the side of the centre garden further still.

Solar lights hung from high places and among the plants make our garden a wonderful relaxing place at night.

This really added to the feel of the garden, as did raising the height of the boundary walls for the sake of privacy.

The netting covering the garden is to keep our cats inside and to keep birds safe from the cats.

Our cats love our garden — they play hide-and-seek in the undergrowth, and there is a big water dish under the catnip where they drink water like little leopards.

Just because you live in the concrete jungle, it does not mean you cannot surround yourself with nature.

We brought nature into our home and it is wonderful.

I hope this helps you see what is possible and maybe you can do this for yourself, too.