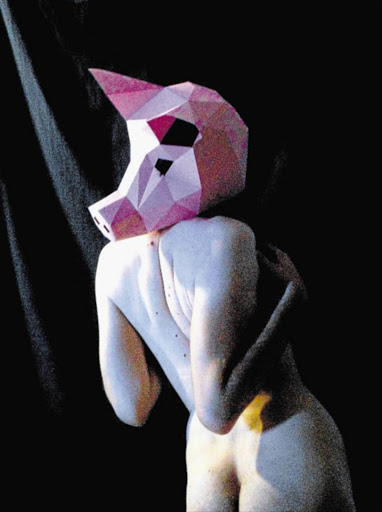 Shocked theatregoers watched performance artist Gavin Krastin standing naked and vulnerable, but for a strip of tape over his privates, and clamp more than 10 clothes pegs to his lips.

He finally snapped a small mousetrap on his tongue while reading the South African Bill of Rights. There is blood on his hands when the trap is finally set.

Despite this assault on his ability to speak, the artist struggles on with words muffled and his breathing constrained. He gags and hyperventilates.

It is incredible that we can still hear the words though. He will not be silenced.

In a final horrifying scene, he cradles a real pig’s head, draped in the South African flag, in his arms and holds up a glass of champagne in a bizarre and cynical toast.

It is complex work, and the play notes explain that the pig’s head is more than a political reference to us and our politicians, but comes out of William Golding’s novel Lord of the Flies.

For the audience, it is a protest against what Krastin calls “politricks”. The self-inflicted brutality is intentionally brutal to watch.

Two audience members cracked and left the show, while others held their heads, gasped, cringed and winced.

This is intentional as Krastin is saying that the pig-headedness of the corrupt and rotting state is also a reflection on our individual pig-headedness in allowing it all to happen. What we are doing through our apathy amounts to nothing less than self-censorship.

We may judge his nudity from our own moral view, but Krastin is using his body as a canvas for expression.

Finally, he stands with a thin chord around his neck which is choking him, with two strands running over his head into hooks which hold his nostrils back and flared.

His mouth is a snout of wooden pegs and and the wire of the mousetrap boring into him. He has become a strangely mirror image of the pig’s head staring at him across the way from a South African-flag covered plinth.

Then he sits down and, using a blade, makes two small cuts to draw blood. He then walks across a sharp manicured lawn to the pig’s head, and gives that bizarre toast.