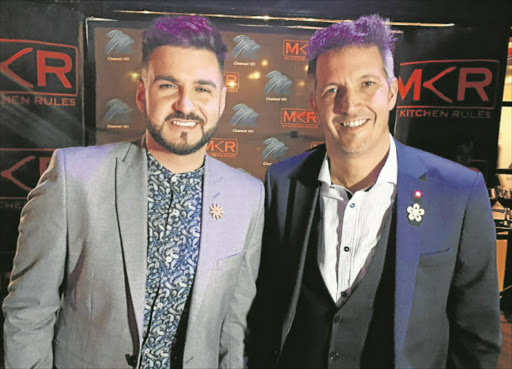 HOT STUFF: J’Something, left, and David Higgs return as judges in ‘My Kitchen Rules’ Season2 which starts on M-Net on June 3 Picture: BARBARA HOLLANDS
As a judge on M-Net reality show My Kitchen Rules Season 2 he calls the shots, but when J’Something visits his mother in the Eastern Cape he sits back and tucks into home-cooked Portuguese fare without the burden of scoring her dishes.

The Mi Casa singer and Johannesburg restaurant owner was at the chic launch of the hit show’s second season at the My Kitchen Rules studio in central Johannesburg on Tuesday night, where the media got its first glance of the 10 couples who will be pitting their culinary skills against each other to win R1-million.

“We have great contestants for Season 2. They are amazing, diverse and very, very different from one another,” said Portugal-born J-Something, who matriculated at Grahamstown’s Graeme College and attended primary school near Kleinemonde before that.

This year’s contestants of the foodie show, which pits home cooks against each other, donned their glad rags for the media and were asked to critique dishes cooked by last year’s winners, Jamandi and Machiel Bekker.

While some were complimentary about the carefully crafted dishes, others went for the jugular and gave them a roasting.

One complained of the sauce being split, another said her lamb was “still alive” and a third said it was the worst lamb dish he had ever eaten. Cut-throat strategy or brutal honesty? It was difficult to say.

What was immediately apparent was the entertainment value the medley of couples will offer.

There is the suave older gent married to a beautiful young lawyer with a refreshingly acerbic tongue, the married women from Bloemfontein who dote on their herd of small dogs, the larger-than-life couple from Manenberg, two outdoorsy 20-something countryside sisters and a gym-toned Johannesburg couple who dress to kill.

Two have Eastern Cape links and the Daily Dispatch will interview them ahead of the season’s first episode. However, for now, M-Net is keeping certain contestants’ details under wraps as the series is only half-way through shooting.

Executive producer Gary King said it was important that viewers find contestants they can identify with.

“This is why we look at people who fulfil basic archetypes and who also provide lots of content.

“It’s amazing how many people went through the application and casting process – and these 10 couples stood out. There was no debate about the final selection.”

And, while some of the contestants lambasted the lamb, J’Something, who is a frequent visitor to his mother Lisa da Fonseca’s Port Alfred guesthouse Villa Vista, said it was tasty and hearty, much like the food he grew up on.

“My mother and I used to cook together, but now when I visit her, she cooks for me because I go to Port Alfred to relax. Then when she visits me in Jo’burg I cook for her. I grew up in Port Alfred and was a waiter at Butler’s Restaurant, which she used to own.” He spends his birthdays at Hemingways, and said East London was “very significant” for his band. “I’m an East London boy.”

l My Kitchen Rules Season 2 begins on M-Net on June 3 at 6pm. — barbarah@dispatch.co.za