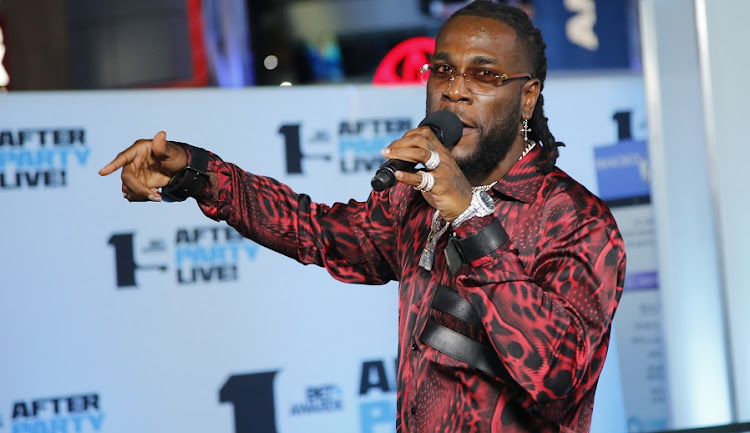 Nigerian artist Burna Boy is set to perform in SA this weekend, but some artists have called for a boycott of the concert in which he is due to feature.
Image: Maury Phillips/Getty Images for BET

Burna Boy is set to perform in SA this week, but artists and event organisers want performers to boycott the show and fans to return their tickets, warning of a possible “shutdown” of the event if their demands are not met.

The group, who united under the umbrella of Tshwane Entertainment Collective, recently released a media statement slamming the government's alleged involvement in the concert and the inclusion of Burna Boy.

In a series of tweets in September, Burna Boy urged black foreigners living in SA to defend and protect themselves against xenophobic attacks. In a now deleted tweet, he also told SA rapper AKA to beef up his security, before giving him the middle finger. He promised to never set foot in SA again until the government “wakes the f*ck up and  really performs a miracle”.

Analyst Jamie Mighti blasts AKA: If not for Burna Boy, you'd be over by now

Political analyst lambastes AKA, says he is politically illiterate and owes his success to Nigerian rapper Burna Boy.
Lifestyle
2 years ago

The department of sports, arts and culture has previously distanced itself from the concert, telling TshisaLIVE it had not provided funding for the concert and its logo had  “erroneously” been used on posters advertising the event.

However, the Tshwane Entertainment Collective believe this was a “distorted response” from government, and that funding for the concert was “redirected to be issued through a state-owned agency as opposed to the department itself”

“We call on the MEC of economic development and the premier in Gauteng to ensure that any and all funding support endorsement by Gauteng Tourism or any state entity be withdrawn from the Africa Unite Concert immediately,” the group demanded.

It also called on musicians and fans to do their part by boycotting the event.

“We encourage all local artists, whose livelihood is attached to the success of our industry, to stand in solidarity with our cause for justice and due process by withdrawing from performing at the concert. Our cause should be a shared one as the outcomes benefit us all. We encourage all members of the public to return their purchased tickets to the event for a refund.”

They warned that failing to do so would may result in “an unavoidable shutdown” of the event.

“We are concerned that failure to comply to the terms above will result in an unavoidable shut down which may require physical enforcement. As such, we do not deem it advisable for the public to avail themselves to attend,” the statement read.

Rapper AKA takes SA government to task
Lifestyle
2 years ago

The group also took aim at the department's Mzansi Golden Economy Funding Program, claiming that young entrepreneurs have unsuccessfully applied for this funding for years and R100-million was allegedly “misappropriated, with some millions being paid to an event in which the minster himself has financial interest”.

Several attempts by TshisaLIVE to contact the department for comment about the claims were unsuccessful at the time of publishing this article.