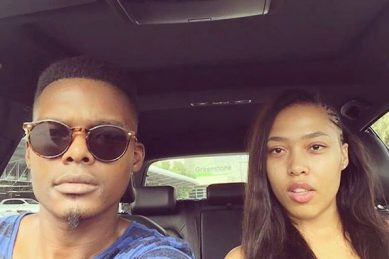 Simz Ngema spoke about how she is dealing with the trial into Dumi's Masilela's murder.
Image: Via YouTube

Nearly four years after she lost her husband Dumi Masilela, actress Simz Ngema has opened up about how she has been dealing with the trial into his murder, and how she has chosen to forgive his alleged murderers for the sake of her peace.

Her late husband was shot and killed during an attempted hijacking in 2017.

The actress spoke candidly about all things related to Dumi with Mac G on his popular Podcast And Chill. After speaking about how they met and how their love story was nothing short of amazing, the actress spoke about moving on with her life and her decision not to follow the murder trial.

MacG asked Simz if the murder suspects had been found and Simz responded: “Yes. The trail started on May 31. It was his birthday, funny enough.

“I made a conscious decision not to follow the trial because losing Dumi is a big enough burden to carry. I am not going to carry the burden of not forgiving as well. That will be too much for me. I don’t follow the trial because if the justice system fails me, then what? If they run free, then what? I am I going to be miserable for the rest of my life because there is somebody I haven't forgiven.”

Watch the full episode below:

Sowetan reported on Monday that the trial  of the five men accused of murdering Dumi  was delayed again on Monday after the prosecutor called in sick.

Last year, South Africans were happy to find out that after suffering one of the most traumatic experiences - Simz planned a wedding and a funeral just two months apart - the actress had finally found love again.

The nation watched as Simz was made a widow after a botched hijacking took Dumi's life, and offered their support as she grieved publicly.

In August she announced that not only had she found love again, with actor Tino Chinyani, but she was expecting her first child.

“Indeed there is a God in heaven. He wiped away my tears and gave me joy in abundance. You’ve brought hope and purpose to my life. Tino. I will forever be grateful to you for this beautiful gift and for teaching me how to love again. I love you both with all my heart,” she wrote at the time.

Speaking to MacG about Tino, Simz said she loved the father of her child more than Dumi. She reasoned that losing Dumi had taught her to love better because she has personal experience of how humans live on borrowed time.

However, the actress made it clear  she was not ready nor was she in a rush to tie the knot with Tino. She said she still had to work through some aspects of marriage that trigger her.

Simz Ngema on motherhood: 'I have newly found respect for mothers'

'I have newly found respect for mothers'
Lifestyle
1 year ago