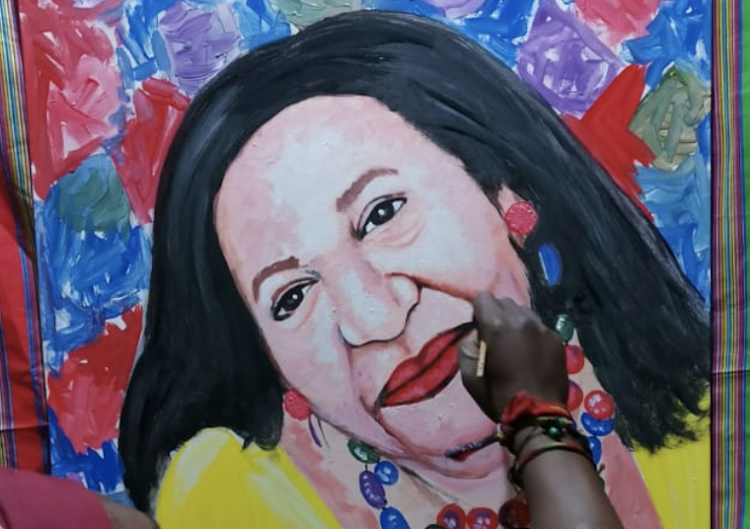 The artist to the stars has rubbed Twitter up the wrong way with his painting of actress Shaleen Surtie-Richards.
Image: Twitter/Raste The Artist

Controversial celebrity painter Lebani Sirenje aka Rasta the Artist has left the TL up in arms after sharing his tribute to the late veteran actress Shaleen Surtie-Richards.

The actress died last week aged 66. Mzansi has honoured Shaleen's career and life in various ways and paid homage to her talent.

Well known for his portraits of Mzansi's rich and famous, Rasta also paid tribute to the late actress in the form of a portrait of her.

“One of SA's best actress and TV star [sic]. RIP Shaleen. Thank you for your contribution in art,” said Rasta.

One of South Africa's best actress and TV star

RIP Shaleen. Thank you for your contribution in art 🙏🏽 pic.twitter.com/pzS0z5S27w

And, as expected with Rasta, people were left fuming.

Claiming that the painting has little or no resemblance to the Fiela Se Kind actress, many accused the artist of purposefully painting another person's face.

According to bhut Rasta this is Shaleen😏 pic.twitter.com/fy4XYGPmuF

Surely you are doing this intentionally, there is no way you keep getting worse 🙄 https://t.co/tzShBR5e53

Disrespecting legacies for clout.. This is what this kak is. https://t.co/yuicN0dz5f

The actress was found dead in a guest house in Cape Town on June 7 where she was staying during the filming of the TV series Arendsvlei.

On Sunday, Shaleen was buried at Durbanville Memorial Park in Cape Town surrounded by family and friends.

President Cyril Ramaphosa approved the request for Shaleen to be honoured with a category 2 special provincial funeral.

Shaleen passed away on Monday morning at the age of 66.
Lifestyle
1 month ago

Family spokesperson Alistair Isobell said the family had decided to request the provincial send-off due to the important role Shaleen played in the coloured community and creative industry as a whole.

“We believe that Shaleen has been an advocate, ambassador and a voice for the coloured community throughout SA as to what can be accomplished, as well as an inspiration to many aspiring actresses, including being instrumental in ensuring that the young female coloured community know that any and all goals can be reached through dedication and hard work,” he said in a statement.