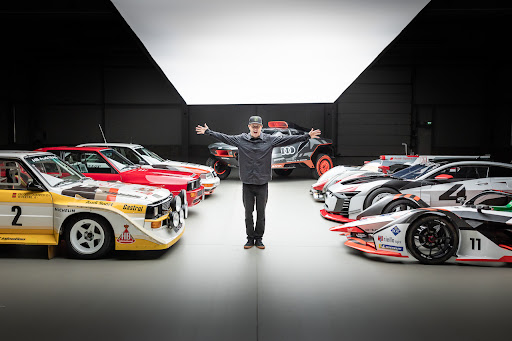 Ken Block has ditched Ford for Audi and will perform his next Ghymkhana video behind the wheel of Igolstadt's all-electric e-tron.
Image: Zachary Mertens (HRD Marketing)

Ken Block and Hoonigan Racing Division are excited to announce that they have teamed up with Audi on an electrifying new partnership, which will include expanding the Gymkhana franchise to include a new instalment starring a very top secret Audi e-tron.

The film, dubbed 'Electrikhana,' is scheduled to release in 2022. This union will also see the veteran rally racer exploring Audi’s cutting-edge racing and EV technologies, plus serve as a catalyst to push the limits of what’s possible in an electric vehicle. For Block, this partnership is literally a dream decades in the making.

“Audi’s efforts in the WRC, specifically with their Group B cars, along with their wins at Pikes Peak in the 1980s is what led me down the path to become a rally driver,” says Block. “Their quattro system pioneered the AWD car revolution and forever changed the sport of rally, and now I’m getting a chance to be a part of their next leap in motorsports with electric performance. It’s quite an honour, and humbling, to now consider myself a part of a team that I have highly respected for so long. And I can’t wait to share more details on the vehicle Audi is building for 'Electrikhana,' it’s going to be insane.”

To lead off the new relationship, Block recently travelled to Audi’s home in Ingolstadt, Germany, to submerge himself in all things Four Rings. The trip is documented in a three-part series, the first episode of which is available today on Block’s YouTube channel.

In the series, Block explores the influence, heritage, and the future of the automobile manufacturer in racing. He samples an arsenal from Audi’s current line up including the new “incredibly fast” Audi RS e-tron GT as well as the Audi e-tron Vision GT concept car.

But while the partnership looks to the future of performance, Block wasn’t going to miss out on an opportunity to drive some iconic machines from the past, including Hans Stuck’s championship winning DTM Audi V8 and Walter Röhrl’s legendary Group B Audi Quattro S1 E2. In addition, Block gets an intimate look at Audi’s all new Dakar-racecar, the RS Q e-tron racer that will be reimagining the way people view electrification in long distance, endurance racing.

“Every day we are trying to push boundaries to create the future of mobility,” says Oliver Hoffmann, board member for technical development at Audi. “Our goal is to fascinate our customers with progressive design, innovative technology and a broad digital ecosystem. I am delighted that we were able to attract Block and his team to Audi.”

And to answer the question on everyone’s minds: why the switch to electrified vehicles? For Block, it’s simple really: “It’s new. It’s high level performance. It’s the future. And new technology and forward thinking – the things Audi is great at – can be used to have even more fun with cars, and I am all about that.”

The 2021 South African Car of the Year (Coty) trophy was on Monday awarded to the striking Peugeot 2008 that launched locally earlier this year with ...
Lifestyle
4 weeks ago