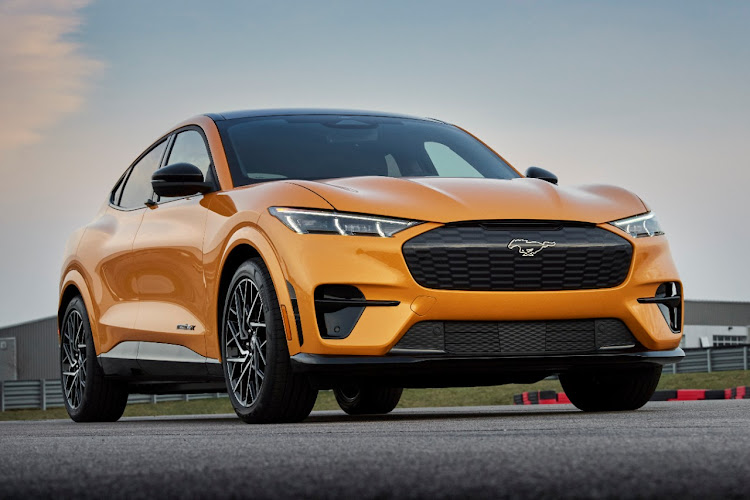 The Mustang Mach-E GT is one of the new all-electric cars in Ford's arsenal.
Image: Supplied

General Motors Co and Ford Motor Co are revving up their century old rivalry, this time over which will sell more electric vehicles by 2025.

But with Tesla ensconced as the global EV leader and the Volkswagen Group mounting a $100bn-plus (roughly R1.6-trillion-plus) challenge, GM and Ford are racing for third place, at best.

As the biggest Detroit carmakers struggle to escape from Tesla's shadow, the Motown matchup is like two football teams slugging it out using very different playbooks.

GM on Wednesday announced plans to form a joint venture with South Korea's POSCO to build a battery cathode materials plant in North America by 2024. The deal is part of the automaker's long-range plan to carefully construct a proprietary, vertically integrated EV machine that it will fully turn on only when costs fall and demand grows in the second half of the 2020s.

US President Joe Biden climbed behind the wheel of an electric Hummer vehicle on Wednesday and sped off with a screeching of tyres, in a test drive ...
Lifestyle
2 months ago

On Friday, Ford will elaborate on its markedly different EV strategy. It plans to quickly launch several higher-volume models such as the Mustang Mach-E and the F-150 Lightning, using modified combustion vehicles. Ford will follow up in the middle of the decade with a broader portfolio of electric SUVs and trucks, designed from the ground up to run on batteries.

Despite their activity, both Detroit automakers are expected to lag well behind EV market leaders Tesla and VW through 2028, according to data provided by AutoForecast Solutions, whose production estimates are widely used across the industry.

Local manufacturers produce only vehicles powered by internal combusion engines, which are being phased out globally, while SA consumers are put off ...
Lifestyle
1 month ago

The data also shows the Detroit giants must deal with a surprise contender for third place in the global EV race: Stellantis, the European company formed last year by the merger of French automaker PSA and Italian-American automaker Fiat Chrysler. Here's a graphic.

AFS expects that Tesla's global output will reach nearly 1.5-million by 2025, with further growth depending on where and how the company expands its production footprint.

GM's EV numbers look much thinner: 494,000 in 2025 and 624,000 in 2028. Those figures do not include production from the SAIC-GM-Wuling joint venture in China, which produces EVs under the Baojun and Wuling brands and in which GM is a minority shareholder.

Ford's strategy differs from GM's in other respects. While both companies plan to build EVs in the US, Canada, Mexico and China, Ford also will source production in Germany, Turkey and Spain. GM will get electric vehicles from nine plants in 2028, Ford from 12, according to AFS data.

One common element: Both companies will heavily electrify their premium US brands. GM's Cadillac will offer the Lyriq, Symboliq, Celestiq and Escalade EV, as well as a compact SUV, by 2025. Ford's Lincoln will counter with electric versions of the Corsair, Aviator and Navigator, along with an electric pickup.

Ted Cannis, head of the Ford Pro business unit, said the company has seen so much early demand for the new F-150 Lightning from fleet and retail customers, “I'm not sure how we can supply” enough vehicles.