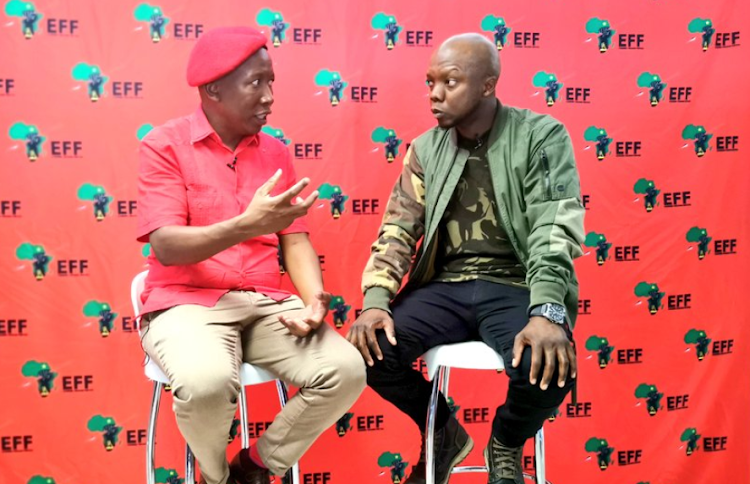 EFF leader Julius Malema is among those who have congratulated Tbo Touch on his return to Metro FM, saying it “will threaten only those with low self-esteem”.

Touch's return to the station he left six years ago was announced this week.

He picks up where he left off with his afternoon drive time show, The Touchdown. He takes over from Sphe and Naves and will be joined by Morena Mothupi on the sports desk.

Malema was amped at the announcement and took to the socials to say Metro FM will “never be the same”.

“My boy Tbo Touch is back in the building: Metro FM will never be the same. The return of the best will threaten only those with low self-esteem. Congratulations, my guy. Kill them,” he wrote in a message to Touch.

My boy @iamtbotouch is back in the building; @METROFMSA will never be the same. The return of the best will threaten only those with low self-esteem. Congratulations my guy, kill them.💃🏼🕺🏼💃🏼🕺🏼📯📯📯 pic.twitter.com/tAlPHV2n0T

The pair have always had a good relationship, with Malema attending Touch's birthday parties and appearing on his Touch HD radio station.

Touch resigned from Metro FM in 2016 after more than a decade on the mic. A few months before his departure he was suspended by the station, amid rumours of a physical altercation.

He denied the allegations to TshisaLIVE and said he left on good terms.

“I've always been the type of person who pushes boundaries. My ideas aggravated certain people. When I was asked to cut certain features, I refused. I was asked to stop certain things on air, and I refused,” he said of the suspension, saying it gave him the clarity to decide to move on.

The SABC refuted claims that Tbo Touch will be paid R480,000 monthly.
Lifestyle
2 months ago

Sunday World reported earlier this month that Touch would make a return to the station with a take home salary of R480,000. The SABC called the report misleading.

“The public broadcaster rejects this deliberate misinformation as it is misleading and factually incorrect. The SABC’s CEO does not get involved in line-up negotiations as that is the job of programme managers and business managers. In addition, the SABC does not pay car allowances and other fringe benefits to freelancers.”

The broadcaster said it followed strict guidelines from a regulatory body that dictates its workers' pay grades.