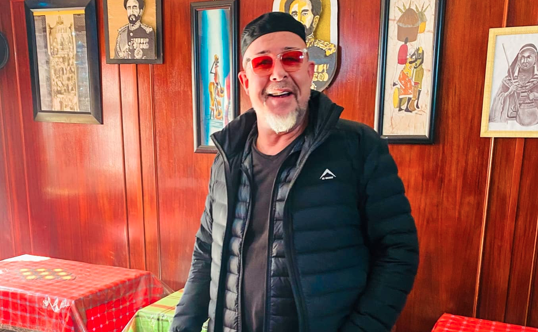 The actor has died at the age of 55.
Image: Twitter/Jamie Bartlett

“We've had confirmation from a close family member that Jamie has passed," he said. "We will have more information in the morning.”

Details of Bartlett's death were not known at the time of publishing this article.

Popularly known as "The Don" for his role as David Genaro on soapie Rhythm City, the actor was lauded for his ability to evoke a sense of fear in viewers with his husky voice and deathly stare. He left the show after more than a decade in the role, making his last appearance in February 2020.

He was also much loved for his portrayal of the shady Mike O'Reilly on SABC3's Isidingo.

Eastern Cape actress Noxolo Maqashalala has died. She was 44. According to family friend Senyukele Zibobo, Maqashalala's body was found at her ...
Lifestyle
1 year ago

Bartlett was a judge on SA's Got Talent, starred in several theatre and TV productions and hosted actor workshops.

In 2013, he starred in the film Mandela: Long Walk to Freedom alongside Idris Elba.

More recently, he played the role of Piet in the eVOD original production Piet's Sake. eVOD is eMedia's streaming platform.

The star was among SA's most-loved actors, winning three prestigious SA Film and Television Awards in a career spanning more than three decades.

He was married to, and divorced from, former Generations actress Camilla Waldman. The couple had a son together.

Jamie Bartlett will always be remembered for his iconic David Genaro character. One of the best actors we've ever seen in South Africa. May his soul rest in peace 🕊️ pic.twitter.com/QgWqft2gbz

It was your soul that touched us all
🕊️🕊️🕊️🕊️🕊️🕊️🕊️
Jamie Bartlett a.k.a David Genaro
May your soul rest in peace... pic.twitter.com/wL8YlFs44u

One thing about David Genaro ? He carried Rhythm City on his back for years! 🥺❤️

Jamie Bartlett bought me a drink once. At SiX in Melville.
He didn't break character. David Genaro bought me a dop.#RIPJamieBartlett

David Genaro. What a villain. I grew up watching Jamie Bartlett on TV. Condolences to the Bartlett family. #RIPJamieBartlett 💔🙏🕊 pic.twitter.com/M05zBrhItB