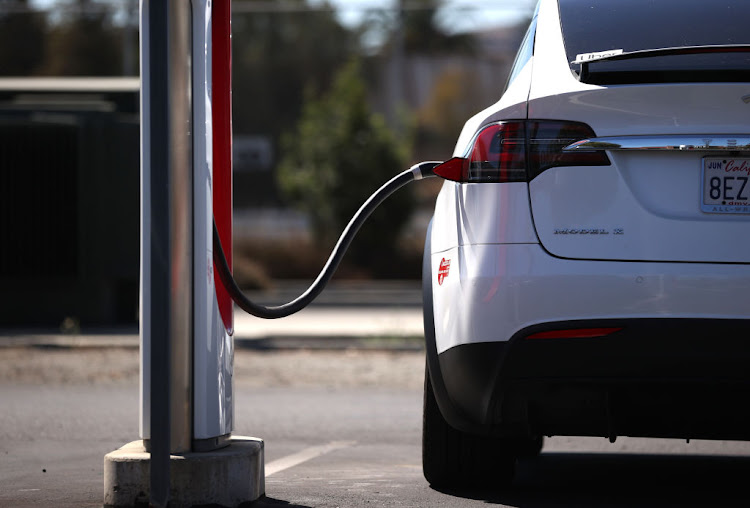 Tesla Inc on Wednesday reported its fifth consecutive quarterly profit on record revenue of $8.8bn (roughly R143,592,240,000), boosted by an uptick in vehicle deliveries and sales of environmental regulatory credits to other car makers.

The electric car maker also affirmed its target to deliver half a million vehicles by the end of this year, a goal that will require it to significantly ramp up vehicle sales in the fourth quarter.

Shares were up 2.5% at $433.88 in extended trade as the carmaker beat analysts' estimates.

Tesla said it had the capacity to produce and deliver 500,000 vehicles this year, but added that achieving its goal has become more difficult.

“Achieving this target depends primarily on quarter over quarter increases in Model Y and Shanghai production,” the company said.

Asked by an analyst during a conference call whether Tesla aimed to deliver 840,000 to 1 million vehicles next year, based on its factories' current maximum capacity, CEO Elon Musk responded that the target was “in that vicinity”, while another Tesla executive said the company would provide guidance next quarter.

Tesla has defied a downward trend in the wider auto industry in 2020 and bucked a pandemic and economic upheaval with steady sales and profitable quarters, sending shares up about 400% this year.

At $394.5bn (roughly R6,439,936,350,000), Tesla's market capitalisation has become the largest among all global automakers, despite the company trailing rivals in sales, revenue and profit.

Tesla's ascent highlights investor confidence in the future of electric vehicles and the company's shift from niche carmaker to global leader in clean cars.

But Craig Irwin, an analyst with Roth Capital Partners, cautioned that Tesla's lead could soon narrow.

The company is still valued incredibly richly, like it's operating in a vacuum, yet competitors are working furiously to catch up

“The company is still valued incredibly richly, like it's operating in a vacuum, yet competitors are working furiously to catch up,” he said, referring to more than 400 new electric vehicle models scheduled to hit the roads by 2024.

General Motors Co on Wednesday revealed an electric version of its Hummer pickup truck that will compete with Tesla's futuristic Cybertruck, which is scheduled to go into production next year.

Musk on Wednesday said Cybertruck orders will be delivered in 2022, or towards the end of 2021 at the earliest.

But Musk on Wednesday said the company would not depend on internal cell production before 2022, suggesting that Tesla will continue to rely on its external battery suppliers Panasonic Corp, LG Chem and CATL.

He also said Tesla would roll out what it calls “Full Self Driving” more widely by the end of this year. Tesla on Wednesday launched the feature for an undisclosed number of “expert, careful” drivers in a pilot launch.

Musk has been promising fully autonomous features for several years and Tesla buyers can pay $8,000 in the hopes of eventually receiving the upgrade.

Safety groups have criticised the term “Full Self Driving” as dangerously misleading, with the system expected to be capable of functioning only in limited-use cases.

Revenue from the sale of regulatory credits made up $397m (roughly R6,486,047,050). Without that revenue, Tesla would not have achieved a profitable quarter.

Pollution credits became a more meaningful source of revenue for Tesla about a year ago when California and other US states increased the mandatory share of zero-emission vehicles sold per manufacturer. As competitors begin selling more electric vehicles, that revenue is expected to dry up.

Tesla has a shot at producing 500,000 cars this year, Musk says in memo

Tesla Inc has a chance at producing 500,000 cars this year, CEO Elon Musk told employees, according to an internal e-mail seen by Reuters
Lifestyle
9 months ago

With recovery in the US sluggish and Europe struggling with a second bout of the virus outbreak, some analysts have pinned their hopes for Tesla on growth on China, which has begun to recover as consumers shake off the pandemic's effects.

Tesla on Wednesday said Model 3 production at its Shanghai plant has increased to 250,000 vehicles a year, its targeted production rate.

Its main factory in Fremont, California, has a capacity of 590,000 vehicles, including the Model Y.

The carmaker said it would focus on improving manufacturing cost and efficiency and increase capacity as quickly as possible.

Tesla is building additional vehicle and battery plants in Berlin, Germany, and Austin, Texas, to ramp up production of existing vehicles and launch new models, including its Cybertruck and Semi truck.

Production at the German factory is expected to start in 2021.