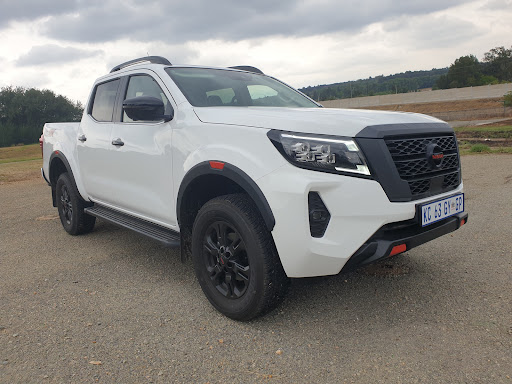 Compared to some blink-and-you’ll-miss-them vehicle midlife updates, the Nissan Navara has undergone much more than the traditional shot of Botox.

In a makeover worthy of Cher, the one-tonner has emerged from the parlour with not only a facelift, but also technology and safety upgrades, and improved refinement.

It’s also now built at Nissan’s Rosslyn factory near Pretoria, having been previously imported since its 2017 launch. The range was formerly available only in high-end double cab variants but has expanded into a full line-up of workhorses and leisure vehicles in single- and double-cab guises.

A nose job sees the Navara adopting a stockier face reminiscent of American pickups, with a larger grille and restyled bumpers, along with new LED headlamps and fog lamps. Styling swagger in the range-topping Pro-2X and Pro-4X models is further ramped up by black alloy wheels, dark accents and the all-important decals.

An interior revamp has glammed things up with attractive new leather seats with contrast stitching and a sportier three-spoke steering wheel with a red Nissan logo. The dashboard remains hard plastic but all the human touchpoints, including the door armrests and the centre console between the front seats, are softly padded. 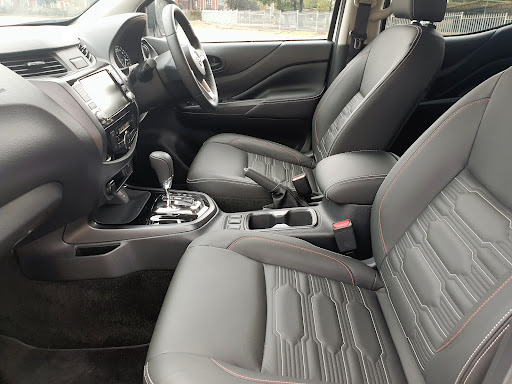 Overall it’s a pleasant step up in cabin ambience and the bakkie also gets improved safety with a host of new driver aids. ABS brakes, brake assist and dual front airbags are standard across the range. There are now seven airbags in the higher-specced models, which also add stability control, reversing cameras, blind spot warning, lane departure warning, intelligent emergency braking, and rear cross traffic alert to the safety sheet.

Executive features are plentiful in the range-topping Navara Pro-2X and Pro-4X models, including an electrically adjustable drivers seat, cruise control, automatic headlights and windscreen wipers, a power-sliding rear windscreen, and a touchscreen infotainment system with navigation and all the required smartphone pairing.

Potential family feuds are quelled by the presence of three USB charging points up front and one in the rear. Back-seat passengers also get their own air vents.

A major selling point of the Navara when it was launched in 2017 was its independent rear suspension with coil springs, in place of the hardy leaf springs fitted to most bakkies. It gave the Nissan one of the most comfortable rides in the one-tonner segment, and suspension tweaks make the updated bakkie waft even better.

It’s still bumpier than an SUV when the load box is empty, but the new chassis has revised mountings for less vibration, better shock absorber damping and a new dual-rate five-link coil suspension, which has all noticeably smoothed out the ride particularly on rough gravel and bumpy roads. 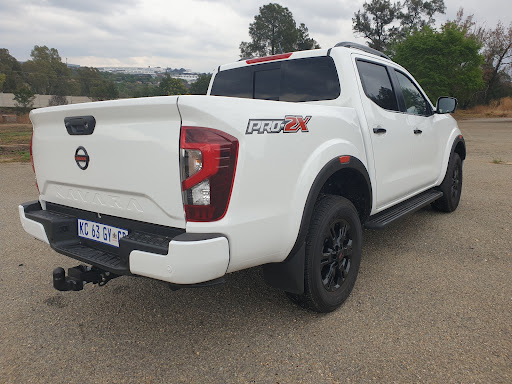 The payload capacity has increased by 100kg. Picture: DENIS DROPPA

We drove the Navara back to back with Mazda’s new BT-50 and the Nissan’s ride comfort won hands-down with decidedly less jolting on uneven surfaces.

The Navara’s diesel engine is also more refined than the Mazda’s, with less of an agricultural clatter. Additional sound deadening has improved the Navara’s overall refinement, and the bakkie cruises more silently.

Nissan has swapped out the previous 140kW/450Nm 2.3 twin turbo diesel four-cylinder engine with a single-turbo four-cylinder 2.5 diesel with the same outputs. It’s paired as before with a seven-speed automatic transmission.

Apart from mild turbo lag in a standing start, the Navara’s overall performance is satisfyingly brisk. It’s an easy cruiser on open roads and has sufficient overtaking urge to whip past long trucks with confidence.

The test vehicle averaged 9.9l /100km which is notably economical for a two-ton bakkie, though the factory-claimed 7.6l seems overly optimistic.

The two-wheel drive Pro-2X on test here is limited to milder off-road experiences than the 4x4 version, but the generous 221mm ground clearance, combined with chunky high-profile tyres and a rear diff lock, do make it capable of some rough trails.

The two-wheel drive Navara makes a slightly better workhorse with its 1,086kg payload, compared to the 1,003kg of the 4x4.

Parking such a big lump is never a simple affair but it’s been made easier with lightened steering that also leads to less driver fatigue when lugging the 100kg heavier roads this bakkie is now capable of carrying.

An easy-lift tailgate also makes loading and unloading easier, but lacking from the spec sheet was a load-box cover, an item we felt could have been included in the price.

That minor complaint aside, the extensive upgrades to the Nissan Navara make it feel more like a new bakkie than a midlife refresh. Its comfortable ride quality and improved refinement make it a real contender to market leaders that have perennially outsold it (we’re looking at you: Hilux and Ranger), particularly as it’s so well priced.