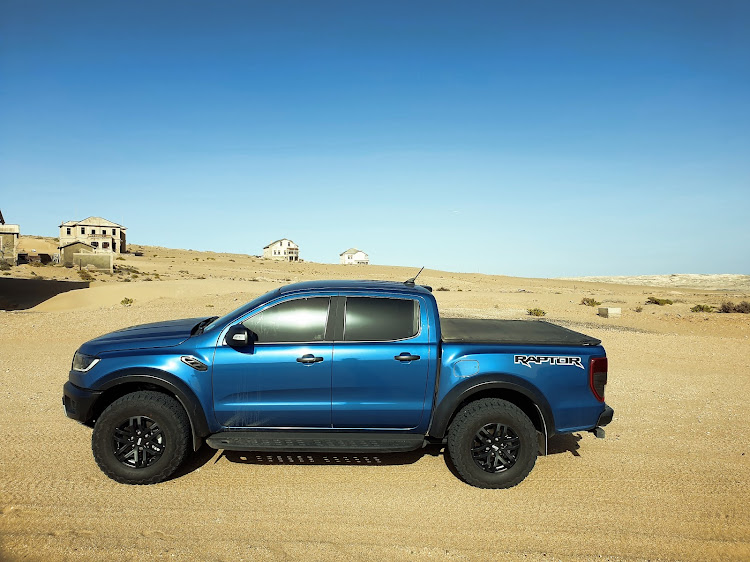 The Ford Raptor at the eerie but beautiful Kolmanskop ghost town in Namibia.
Image: DENIS DROPPA

There really is a town called Putsonderwater. I’d thought it was just a made-up name to denote godforsaken out-of-the-way places, but here it was: a tiny settlement on a Northern Cape gravel road we’d taken as a shortcut en route to the Namibian border.

Google Maps had listed this dusty detour on the R383 from Kenhardt to Marydale as the shortest route, and it cut a significant chunk off our journey time.

Our festive season trip out west included a canoe trip on the Orange River and visits to Luderitz, the eerily beautiful Kolmanskop ghost town, the Fish River Canyon and Augrabies Falls.

Well versed in the Ford Raptor’s all-terrain prowess, we repeatedly took gravel detours to save time on the 3,750km, 10-day trek, though we had to rely on my phone’s Google Maps to find them. The Raptor’s navigation for some reason kept urging us to U-turn back onto main roads, almost as if the vehicle wasn’t confident in its own off-tar ability.

The on-board brain needn’t have worried: with those beefy tyres, long-travel suspension and towering 283mm ground clearance, there wasn’t a detour that challenged the big Ford bakkie, which casually ho-hummed its way over the rough stuff. The only situations that caused slight alarm were a couple of unexpectedly sharp road dips that would have caused the suspension of lesser vehicles to bottom out, but the Ford’s rally-bred Fox suspension breezed through it.

Not that this came as a surprise. We’ve taken the Raptor over some harsh off-road trails over the several months it's spent with us, and it’s mastered every obstacle. It really is one of the best off-road vehicles money can buy if you can afford the R932,400 price. 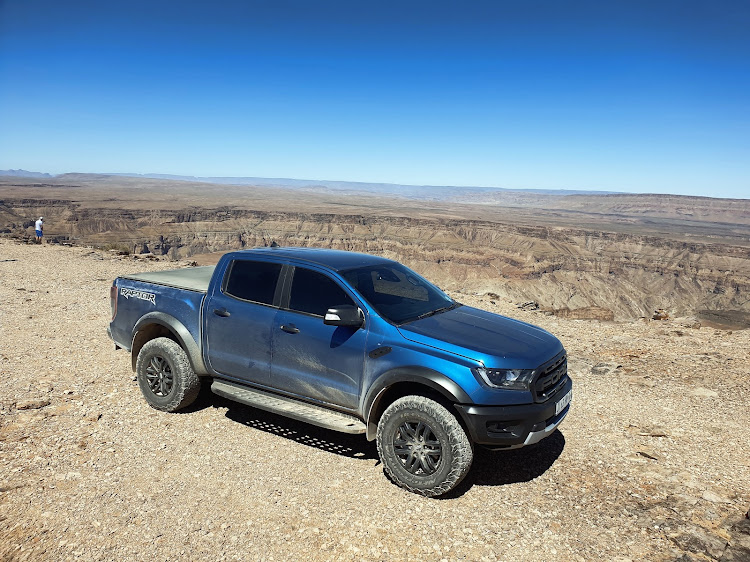 Fish River Canyon was one of the most spectacular stops along the route.
Image: DENIS DROPPA

The shock absorbers have position sensitive damping (PSD) that progressively stiffen as the pace and the bumps intensify, and soften to deliver a cushy ride in normal driving — the latter was an important comfort-enhancing factor on days where we spent up to eight hours in the vehicle.

On some smoother gravel roads I couldn’t resist engaging the Raptor’s Baja mode, named after the Baja Desert Rally in Mexico, which reduces the traction control intervention to allow for some power-sliding but still bails you out of trouble if you try to overdo things. The Raptor’s tail-sliding is progressive and controllable, and there isn’t enough power to get the tail snapping out suddenly.

The 2.0l biturbo diesel four-cylinder engine has been criticised as a weak point of the Raptor package, and doesn’t provide the muscle to match the big-bully looks. The heavy bakkie has good cruising pace and tons of torque, but lacks bite when you want to accelerate hard.

The big Ford slurps fuel at a reasonable rate, and the fully-laden vehicle averaged 10.3l/100km on our lengthy adventure on mostly open roads. The 10-speed auto gearbox helped the fuel thrift by keeping the revs low in high-speed cruising.

But eish, it’s not a parking-friendly vehicle. With this wide boy’s pumped-out wheel arches you always seek out the biggest parking spots, and the Raptor could also really do with a front parking sensor (it does have a rear camera which is handy).

Along with the smooth ride, long-distance travels aboard good ship Raptor are fairly comfy in terms of space and amenities, and the climate control easily kept the cabin chilled in Namibia’s 40 degree heat. There is good leg- and headroom all around, though rear-seat passengers found the backrests a little too upright after a few hours.

A pair of USB ports up front provide smartphone charging and integration with the infotainment system, and rear passengers get 12V and 230V sockets for their appliances.

There’s a 12V socket in the load bay to power camping accessories. The load box swallowed an impressive stack of luggage and camping gear, but all of it got covered in dust when the latch broke on the tonneau cover and we were unable to close it properly. 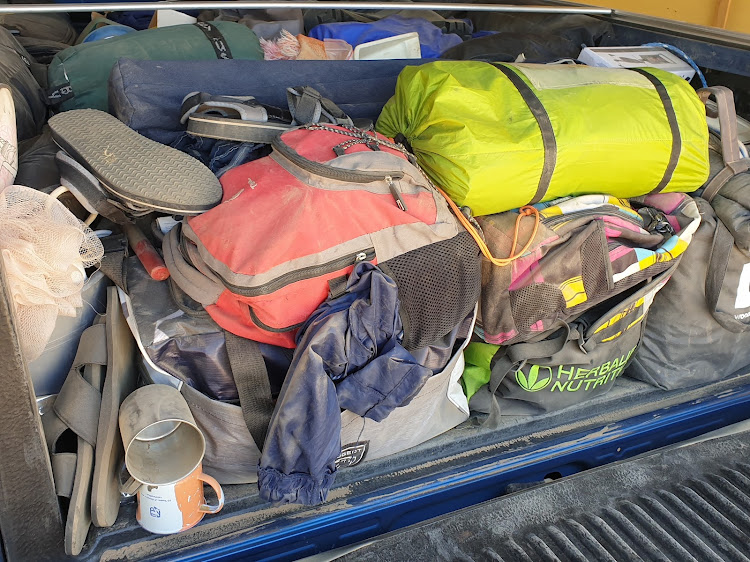 Tonneau cover couldn’t keep the dust out of the loadbox.
Image: DENIS DROPPA

With 27,000km on the odo, this was the Raptor’s second glitch after the front USB ports malfunctioned a couple of months earlier and were fixed under warranty.

The cabin’s dust sealing was very good, however, and overall the vehicle has proven to be a seemingly good-quality and robust package.

The Namibian odyssey was a fitting farewell for our long-term test of the Ranger Raptor. It is an exceptional family adventure vehicle, capable of taking paths less travelled with confidence and comfort, even if they lead through Putsonderwater.