Everything you need to know about the new BMW 7 Series 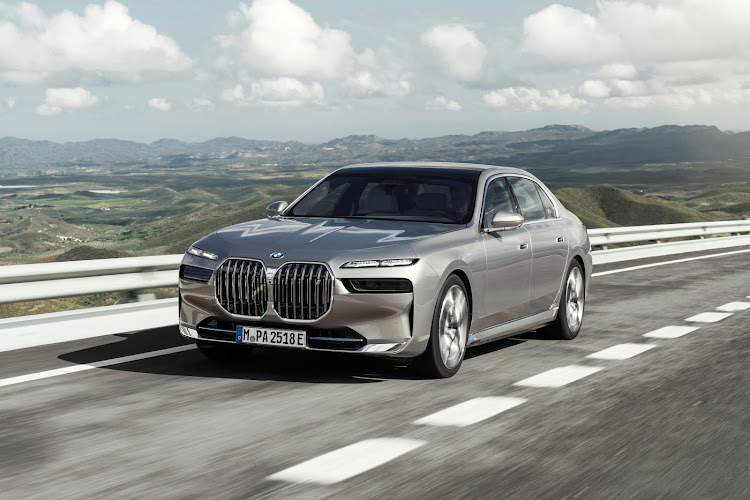 The i7 is the first all-electric 7 Series and can travel up to 480 zero-emission kilometres in silence.
Image: Supplied

BMW began pre-sales of the seventh generation of its BMW 7 Series on Wednesday, featuring for the first time an all-electric luxury sedan as well as hybrid and internal combustion engine (ICE) models.

All three versions will be assembled on the same production line in BMW's Dingolfing plant, with the first deliveries worldwide to take place from November 2022. The new 7 Series is scheduled for sale in SA in November.

Featuring two electric motors with a combined output of 400kW and 745Nm of instantaneous torque, the i7 xDrive60 will sprint from 0-100km/h in about 4.5 seconds while returning an estimated range of up to 480 zero-emission kilometres in silence.

The new 7 Series is also available in petrol-powered 740i six-cylinder and 760i xDrive eight-cylinder versions — the latter featuring all-wheel drive.

The brand’s hallmark twin circular headlights and BMW kidney grille have been re-interpreted; the light functions are now divided into two separate areas, with the upper elements acting as the more prominent focal point, especially when highlighted by optional Swarovski crystal details.

Inside the luxurious cabin, digitalisation significantly reduces the number of buttons, switches, and controls. The fully digital screen grouping consists of a 31-cm information display behind the steering wheel and a 38-cm control display screen. Arranged beneath a shared glass surface, the displays are directed ergonomically towards the driver.

A BMW Interaction Bar debuts in the new 7 Series as a new breed of control and design element. Extending across the full width of the instrument panel and into the door panel, it houses touch-sensitive control panels for adjusting the ventilation and air-conditioning, activating the hazard and opening the glove compartment.

Rear-seated passengers are able to control their entertainment and comfort via touchscreen control units integrated into the doors. The touchscreens control adjustment of the audio system, climate control, seat adjustment, ambient lighting, rear sunshades. A large screen that folds out of the ceiling, allows passengers to watch films and TV shows.

Multifunction rear seats are standard on the i7 xDrive60, and optional on the other models, while seat ventilation and a massage function for the rear seats may be specified on every new 7 Series. 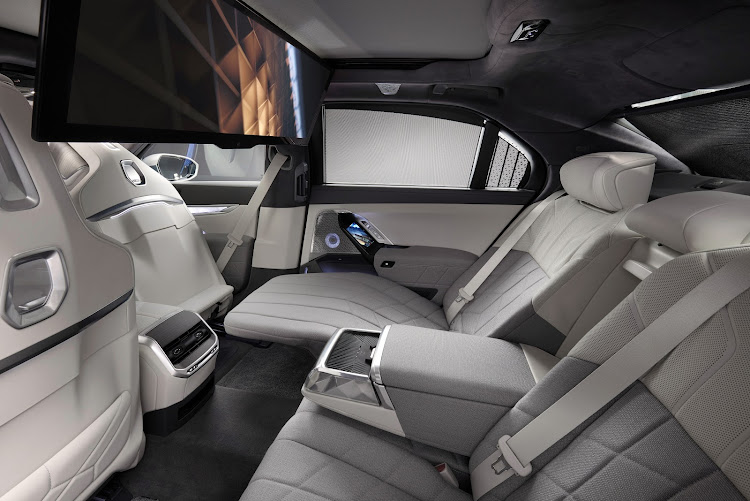 Rear passengers are able to control their entertainment and comfort via touchscreen control units integrated into the doors. Picture: SUPPLIED

The Executive Lounge option ramps up the rear luxury with a reclining seat function with integrated leg rest behind the front-passenger seat, plus an optionally quilted and heated armrest with high-quality glass insert and integrated smartphone tray for inductive charging.

All model variants are fitted with adaptive two-axle air suspension and automatic self-levelling as well as adaptive suspension with electronically controlled dampers. The optional Autobahn Package for the 760i xDrive has an active roll stabilisation feature to reduce body roll through fast corners.

Rear-wheel steering comes standard on the 760i xDrive and i7 xDrive60 (optional on 740i), improving manoeuvrability at slow speeds and enhancing high-speed stability.

With the optional Parking Assistance Package, the car is able to store steering movements over distances of up to 200-metres and subsequently reproduce them in reverse, relieving the driver of having to navigate tricky driveways in reverse.

Customers can lock and unlock the new 7 Series with their Apple iPhone, making a conventional car key superfluous. 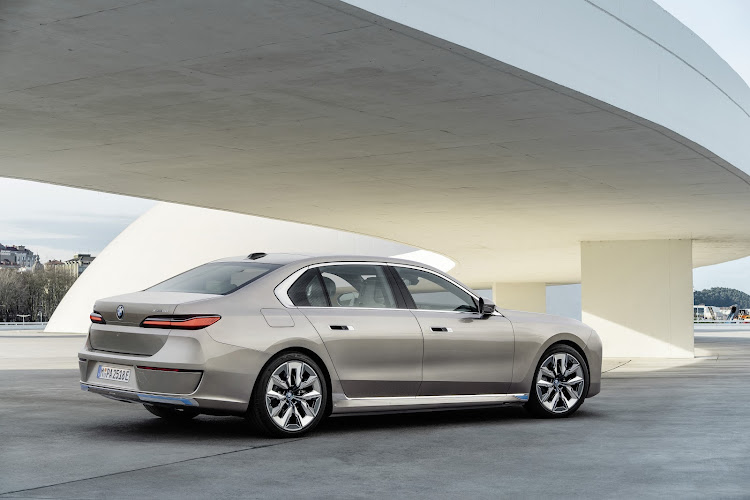 Rear-wheel steering comes standard on the 760i xDrive and i7 xDrive60 models. Pictue: SUPPLIED

CEO Oliver Zipse reckons demand for the ICE model will be higher in the US, where there is less stringent regulation of carbon emissions than in Europe or the UK.

“In Europe you have a growing EV market for all brands. In the US you have one brand that is super successful. It’s completely different,” he said. “The approach we’re taking to put flexibility first works much better.”

Three-quarters of EVs sold in the US in 2021 were Teslas, compared with just 16.4% in Europe, with the Volkswagen brand about 1,200 cars behind, according to data from research firms Cox Automotive and JATO Dynamics.

Zipse, who has long advocated against an all-out ban of ICEs, said companies must be careful not to become too dependent on the countries controlling resources essential for EVs.

Rising prices of the raw materials needed for batteries made it even more important to carry on investing in ICEs, according to sales chief Pieter Nota.

All versions will be equipped with Level 3 autonomous driving capabilities, but the carmaker is awaiting permissions from regulators to enable the feature — that’s likely to take about 18 months in Europe, a spokesperson said.